http://twitter.com/Nanneman
Posted by Armend Morsellino at 14:24 No comments:

Update, January 2013: our official UNIVERSAL EAR website is now the definitive resource for all things Harley Byrne. What follows here is the original blog announcing the project, including the most complete back-story of pre-UNIVERSAL EAR Byrne that we are aware of:

Whilst walking the grounds of Zoomcitta this afternoon I dropped in on the workshop of our Future Films department, the office dedicated to using our infamous modified 2-D Quantum Propaganda Engine to dredge up cinematic artefacts that have not yet been created and ‘redestroy’ them for education and profit. How better to learn from our mistakes – society and filmmakers alike – than to watch them in 256 gaudy colours before they’ve even been made?


It is common knowledge that the modified Engine produces less useful results the further ahead it is aimed and, as a result, the Institute has concentrated on short-term futures, specifically from the year 2012. There is not room here to document the full extent of the department’s cinematic discoveries to date, but one particular curiosity was brought to my attention as I sipped tea with the Future Films crew: an epic serial under the cumbersome title -

“(Being An Adaptation In Serial Form Of Harley Byrne’s Memoirs Concerning His Brave Exploits In The Service Of Capturing All The World’s Music Ever For His Employers At The) Universal Ear (Digicorp, And Starring Mr Byrne Himself In The Role Of Harley Byrne, Himself)”

– or UNIVERSAL EAR, for short.

It seems that Harley Byrne is a real-life figure in 2012 Manchester and, given his celebrity, Future Films have been able to sketch out a certain amount of biographical information about him – which, as you will see, is indivisible from the dramatized memoirs that form the serial.

Earnest, confident, self-effacing but fundamentally smug, Byrne joined the postal service straight from school in order to see Manchester and avoid the university system, working his way up from the sorting office, to letter delivery, to parcels, where he preferred to stay rather than seek promotion to the offices ‘upstairs’. However, in the Christmas rush of 2011 he was attacked by an overzealous guard dog whilst delivering a DVD box set in Ladybarn and, although he managed to beat the dog to death against a gatepost, he lost a finger – and was taken off the streets. A career in routes management beckoned until the postal service won a contract to make information films for the government, as they had done half a century before. Byrne was doubtful about becoming a filmmaker but his only alternatives were clerical work or forced retirement on double pay. He quickly convinced himself that documentary filmmakers were the gentleman explorers of the twenty-first century and set about designing a holistic one-man filmmaking machine – a contraption to record and re-interpret the spirit of a given subject rather than to reproduce light on film or pixels. His intention was to “document” what was in front of him, rather than copy it by simply photographing the light it reflects (such an approach would, to Byrne, have seemed fraudulent and to ignore the deeper truths that two decades of pounding the asphalt had brought to his awareness).

Byrne’s documentarian adventure was short-lived. On his maiden project, the notorious Girls of Unfortunate Climes (aka Icy Video@Abel’s Vagina), the filmmaker was taken captive by the indigenous teenagers he sought to study and – before his subjects were all killed in a freak weather incident – had his spirit-capturing filmmaking machine integrated intimately into his digestive system. By the time he had the strength to check himself out of rehab, his job had been taken by media studies graduates.

Byrne was not to be kept down. A chance meeting with the surgeon who had led the recovery team was to prove fruitful when the cutter, having been impressed with the craftsmanship of Byrne’s errant filmmaking contraption, happened to mention that his wife held a lofty office in the Universal Ear Digicorp. The digital music conglomerate was in trouble: having made a point of boasting their intention to make “all the world’s music, ever” available, they were now the target of a class action by misled consumers. Universal Ear had to appear to be attempting to fulfil their intention, however unfeasible its attainment.

From Universal Ear’s perspective, employing Harley Byrne was a purely token gesture. But once the contracts were signed, Byrne set his mind on the impossible problem of making available for download “all the world’s music, ever”. By cleaning and recalibrating his spirit-capturing movie camera, he was able to use it instead to digitally record the most obscure forms of musical expression - as long as he was in the right place, at the right time, and the right conditions were achieved. Geography and the elements were no barrier to a man who’d spent his best years on the postal routes of Manchester. The precise conditions for recording each stray track would have to be discovered and evoked on a mission-by-mission basis. This left, however, the brief’s unavoidable temporal factor to be resolved.

When all other solutions proved inadequate, Byrne overcame his pride and tracked down the brother he had disowned many years back. Santiago Byrne, a “cripple” of below average male strength, had been raised in the protection of his brother Harley and the two had nurtured a rare and proud fraternal love. Unguarded once his brother went into the postal service, Santiago had fallen into artistic circles and began to drink regularly, undermining the fitness regime that Harley had taken pains to set out for him and refusing to see the error of his ways when Harley found out. The situation had simmered for several months until Santiago deliberately provoked Harley into violence with his degenerate opinions on postage stamp design. Hospitalised and unrepentant, Santiago revealed his ulterior motive had been to have his brother render him unfit for even the white collar work a man of his puny stature was surely destined. Used and betrayed, Harley did not speak to his brother for nearly two decades until he was forced to admit he needed the help of Santiago and the techno-artistic coterie with whom he was associated: the so-called temporal cubists, whose reconceived representations of time, whilst dangerous enough to cause massive controversy and force the group underground, were in effect a potential path into the fourth dimension. If the temporal cubists were unapologetic recartographers of time, Harley Byrne was the one man brave – or foolish – enough to tread the routes they imagined.

The serial itself tells the story of much of what followed, and came about as a result of Byrne’s reluctant ascent to celebrity as his successful expeditions took him thousands of miles and sometimes millions of years around humankind’s – often hitherto unheard of – cultural history, frequently having to adjust his narrow 2012 definitions of “world”, “music” and “ever” and thus constantly extending the task ahead of him. Whilst contemporary time must have seemed to move slowly as Harley returned from each trip to the torpor of 2012 Manchester, for Santiago it was a period of constant activity as he exploited the moral ambiguities of his brother’s imperialist mission, using Harley’s name to draw ever more attention to the work of the temporal cubists. Reluctantly, Harley in turn began to write his own account of his exploits in order to prevent Santiago mythologizing them beyond recognition.

The TV director Francis Dove happened upon an article that Santiago wrote detailing the Girls Of Unfortunate Climes fiasco, found the whole tale hilarious and approached Harley to propose a pilot episode for a potential serialisation of his music hunting memoirs. Byrne instantly refused, telling Dove that “in life, you don't get a pilot episode”. In fact, Byrne must have been worried about the mischievous glint in Dove’s eye: anything less than a completely serious chronicling of his adventures would fail to do justice to Byrne’s character. But shortly after his initial approach to Byrne, Dove’s wife contracted a rare strain of avian flu, a condition which caused extensive brain damage and severe amnesia, such that she could only ever remember a five-minute period precisely 4½ years before any given point. Possibly on Byrne's advice, and with a great deal of heartache, Dove had her permanently committed to an amnesiacs hospice in Northumbria. Finally, he had the sense of gravity needed to take on the Universal Ear project, and production began with Byrne playing himself as the roving huntsman of sound, forever frustrated by his own shifting concept of what does and what doesn’t count as Music.

It has been said that over 1,000 episodes were made, though Byrne was only directly involved in the making of 70-80% of them. Byrne and Dove argued over the use of synthesized sounds where original music files had become corrupted, Byrne arguing that the missing music “belongs lost… playing to itself eternally in nothingness” and that synthetic versions would constitute new music which would, of course, need to be added to Universal Ear’s collection – creating a conflict of interests and potential audio-ethical paradox. In order to keep his memoirs pure Byrne successfully picketed the production of the contested episodes, only for Dove to piece together new performances from outtakes of the existing episodes. This was particularly galling for Byrne as, although the mocked-up episodes are aesthetically indistinguishable from those he intentionally performed in, “spiritually”, he felt, his character came across as “weak; unprofessional; stuttering; desperate” due to the necessary use of incomplete or fluffed lines of dialogue. Despite his contempt for Dove, Byrne approved of and continued to act in the episodes for which the authentic music was available, so as to honour a contract between men. In truth, the contract had only ever existed as a handshake and a long hard stare, which Byrne of course perceived as a moral bond far profounder than any legal document.

The Institute hopes to bring you the fruit of this agreement: the epic, avant-garde yet deeply accessible cycle of true-life adventure films that lay testament to Harley Byrne’s adventures in space, time and sound. And to that end, I put down my brew – cold and untouched – thanked the Future Films whitecoats for their story, and left them to continue their good work, oddly reluctant (as I continued my stroll around the grounds) to put my earphones back in, for what I might – or might not – hear.
Posted by Mr Cole at 17:50 No comments:

It's Nick's Birthday at Antimatter

Most pleased to announce the Institute's work will once again be represented at the Antimatter Film Festival in Victoria, Canada, as our "bilious Mancunian musical" screens there this week. 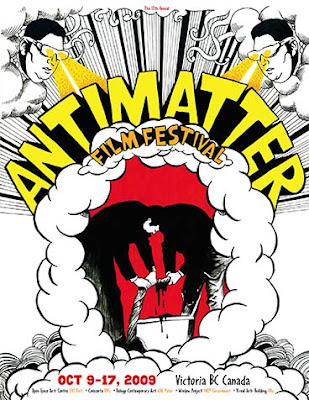 Posted by Armend Morsellino at 17:54 No comments: