The final day of the shoot, and we are sent reinforcements from Bandits-Mages and beyond: Olivia Earle and Julien Record (an appropriate enough name) join us from our host organization, while Lola Martin and Anna Woźnica join us from the ranks of ENSA. Their assistance is invaluable following Decerle and Delevacq's departure yesterday, and Leray's 11am flit today (all three need to get back home in time to prepare for the new school year).

What the rookies miss in being new to the set, they more than make up for in enthusiasm and initiative. Earle and Record immediately go to work preparing body-length smoke suits for a cast of five, while Martin and Woźnica decorate our model of Bourges Cathedral with the tin foil flames that cause the smoke. Leray passes on some newly-learnt lighting tips to Record before his departure, and we get the cathedral inferno scene over with in good time, allowing us to get some pick-ups of a scene by our multi-purpose Roman rampart wallpaper before break time. 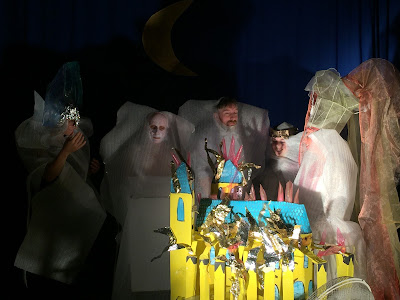 After a lunch of delicious baguettes (Niemczyk's catering has been delicious and plentiful throughout the shoot, and somehow we've filled our bellies to bursting without any real encounters with the dreaded post-lunch slump) the afternoon rolls relatively smoothly.

My brain (and I'm sure those of the other long-term crew members) is beginning to creak and groan after a month in this studio, and this cardboard universe. Fortunately most of the afternoon's scenes are based around more or less the same set-up, the climactic showdown scene in Jacques Coeur's historical pantry, in which Harley Byrne finally catches up with his quarry - who is discreetly recording the ambience of the room. The process is disturbed by noises rising up from the graduation expo at the art school downstairs; some of the more droney sound art works we decide we just have keep in the background of the dialogue and perhaps even use as the 'ambience' which our hero seeks; this works fine at least until the drone is followed up with a hip-hop number in the middle of our delicate finale.

Somehow we negotiate the noise and the fatigue and Mrs Coeur's cartoonishly over-sized hat, which has been a real engineering issue all week, and particularly in the cramped and turbulent showdown scene. We get the scene done with a couple of minutes to spare before our ultimate kick-out time of 6pm; but so long as we have our wonderful 'Real Ursinus' actor Ethel on set, I decide we should push our luck and get one more cutaway of her performing the title track of the movie. Thankfully, the guardian of the building is a friendly and accommodating chap; he is able to factor our needs into his locking up route, presumably at the cost of the noise artists downstairs. There's probably some irony that UNIVERSAL EAR villain Being would find in that. Anyway, we tidy the studio as much as we can between goodbye hugs and getting our rare flamenco albums signed by Felipe, our multi-talented guest star. Then we swipe some costumes for the evening's fancy dress do, and hotfoot it to the Pub Jacques Coeur for some fancy pints in an appropriately named setting. 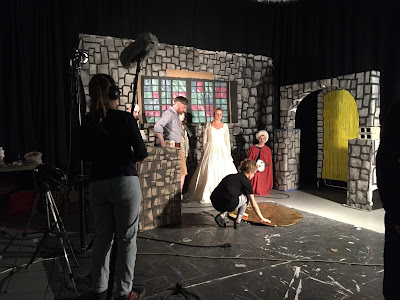