Trapped on the mainland? This week, our short musical It's Nick's Birthday, that soaring cloud of gaseous Englishness, will congeal at the 7th Brive Festival of Cinema to choke the eye engines of natives and exiles alike: 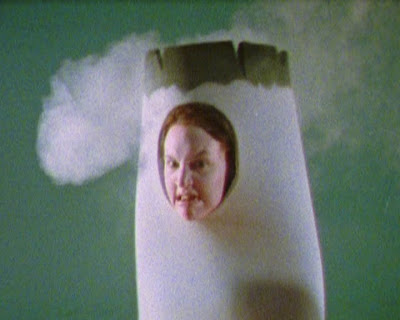 Posted by Armend Morsellino at 11:37 No comments:

This May-June, L’Institute Zoom will begin reconstruction of the infamous lost adventure serial, UNIVERSAL EAR. Occupying ’s Nexus Art Café studio, the Institute will create an open film set to which all are invited to observe and contribute.

The original UNIVERSAL EAR was an adaptation of the memoirs of Harley Byrne – arch-explorer and former postman – with each instalment recounting another of his adventures through space, time and sound on a mission to capture and make available for download “all the world’s music, ever.” Every week in May will see the (re)production of another episode, from Harley’s tussle with over-amorous humming killbots in 3000AD to his trip to the bottom of a teacup for The Song of the Biscuit Crumb Algae.

The Institute’s production schedule will be kept updated on the notice board in the entrance foyer of the café and at zoomcitta.blogspot.com. Café customers and curious cineastes alike are welcome to come through to the studio and hold a boom, paint a set, audition for a plum rôle or heckle gently from the sidelines. Various one-off training sessions and quasi-Redestructivish creative workshops will also be advertised in advance, and the production will be launched on the evening of May 6th with a grand Lumpenbal (rag ball) at Nexus Art Café.

For further information, please email info [at] zoomcitta.co.uk. The production will be documented publicly in the Nexus Art Café and online: 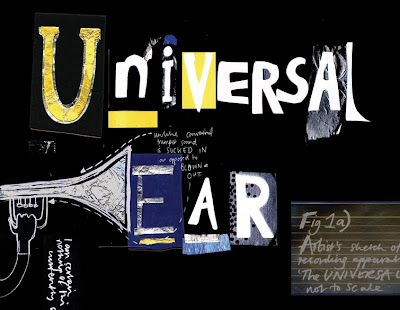 Known to cineastes as one of filmmaking’s greatest follies, Francis Dove’s UNIVERSAL EAR is a rare and epic serial of which few can truly claim to have glimpsed, and none to have seen in its entirety. Shot in Manchester, 2012, with Harley Byrne starring as himself, traces of the original have been discovered by the Institute’s Future Films department using their modified 2D Quantum Propaganda Engine – a machine for dredging up cinematic artefacts that have not yet been created – and pieced together into a blueprint from which to start again. The ‘prehabilitation’ team, including director Graeme Cole and leading man Stewart Lockwood, will attempt to embody the spirit of the original 2012 crew in order to (p-)replicate the work as accurately as possible, whilst working with a fraction of the resources available to Dove and Byrne in the future.

In fact, the team will not even have the comfort of working on familiar terrain. Future Films’ lab at the Institute will be strictly off limits this summer while one of the major search engine companies maps the dynamic emotionality of the premises for its latest online cartography resource, an as-yet unnamed psychogeographic atlas of the known universe. Working instead from the studio of the Nexus Art Café, the production will actively seek support from the public in the form of voluntary participation and donations of obsolete clothing and objects to be re-imagined as costume and set. In return is offered the opportunity to train in the esoteric arts of Redestructivishm and to see the finished works broadcast to potentially hundreds of millions of people in art spaces, festivals and across the internet.

Posted by Armend Morsellino at 11:59 No comments:

I received the following in my inbox today; although it in fact seems to have been intended for the actor Stewart Lockwood and not myself, I assume its author - my boss Graeme Cole - sent it to me so that I might publish it here.

Thank you to the high heavens once more for your inquisition into the reconstructed screenplay of A Flea Orchestra In Your Ear, and the opportunity it has given me to fill some of my abundant free time addressing it.

The conditions under which the Flea Orchestra script was pieced together were not ideal. The signal came through in the middle of the night when, although by chance two young Future Films technicians were in the lab and able to deal with it, neither they nor the modified 2D Quantum Propaganda Engine were appropriately wired up: they being quite drunk and having attempted to reconfigure the Engine as some kind of cross-time DJ booth. When they realised they’d stumbled upon an apparent hip-hop interpretation of the original 2012 screenplay for Flea Orchestra - some kind of novelty number prepared and performed by its creator, Francis Dove, for publicity or personal amusement, or simply a crossed signal between him reading the script and an entirely independent hip-hop performance of the future? – the first lab hand quickly put his ear to the dimly rapping speaker and relayed what he heard to his colleague who, having located apparently the only biro in the workshop chained to a desk some five or six metres away, attempted to transcribe the script by proxy. The inclusion of various inappropriate sketches on this new manuscript indicates the lab assistant’s state of mind at the time, and closer inspection of the doodles has further indicated some deep-rooted emotional issues that he is now having dealt with over in Psych’, and which there is not room here to examine more closely.

A: Have you heard of Cliff Richard?

A: Neither have I.

In answer to your other questions – Being wants Nola Luna’s Orchitron to thrive in the organic flux of physical space-time, so destroying it would not be an option; our reconstruction of it will be more in the approach of “Gus Van Sant’s Psycho” than “Tim Burton’s Planet of the Apes”; I have seen only glimpses of the original Flea Orchestra, plus the script of course, but we’re looking for more. I’ve also managed to compile a little background on Francis Dove; I will send it to Psych’ so they can aesthetically profile him. Then it’s just a question of joining the dots on-set.

And finally, I seem to recall you questioning Byrne’s disrespect for causality somewhere or another: briefly, in the great imperialist tradition, Byrne considers his own time and place to be sacrosanct, and to be the definitive watchtower for all human history (and future). It is Manchester, 2012 where the definitive catalogue of all music ever is being created and consecrated. Therefore, if he drops the odd causality wrapper, leaves behind the occasional empty tin of paradox, well, people should just be glad he’s graced them with a visit and preserved their music forever – even if, on occasion, they themselves no longer have access to it.

I must go now, I’ve somehow wound up obligated into a squash date with Armend and my kit’s still at the cleaners.

Posted by Armend Morsellino at 14:29 No comments: