I told Turing, 'Your machine does not think.'

Update, January 2013: the full ebook from which the below is an extract can now be downloaded for free. 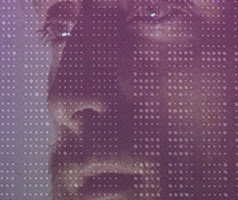 Here follows an extract from the memoirs of Harley Byrne, concerning his brief association with Alan Turing, whose centenary it is today. The full chapter, entitled Listlessness In Early Automated Composition Devices, will be released in ebook form later in the year.


As we join them, Harley Byrne - whose ongoing mission is to record and make available for download all the world's music ever - has travelled back in time to 1952 and tracked down the "mathematician and homosexual" Alan Turing. Having insinuated his way into his home, Byrne finally convinces Turing to take Byrne to his place of work - the institution we now know as the University of Manchester.

"[I]f there was one figure who really stood out among the community, it was Turing himself. He would jog to work the twelve miles from Wilmslow and, to counter the rains for which the region is quite justifiably famed, had invented an aerodynamic umbrella which attached to the shoulders of his running vest. Such was Turing’s involvement in his work, he would often forget to remove the vest or the umbrella upon arrival at the university. Not even his most trusted colleagues felt close enough to him to draw his attention to it. Instead, he would wander the campus all day, his obliviousness to the construction over his head proving a testament to its lightweight design. Here comes old dry-hair, mischievous students would hiss at each other in the canteen. I don’t think he noticed. Anyway, we were the only ones in shorts, and I think this helped him to trust me.

On the third day, after lunch, he consented to show me his latest contraption: the automated music composition device whose output was my quarry. This computing machine, Turing told me, was the closest thing to artificial human intelligence that had been built at the university so far. His colleagues referred to it as the electronic brain. Turing had named it ERIC52.

Turing had occupied an unused office on the fourth floor of the university Main Building and filled it with machinery of his own design and labour. The electronic brain filled 90% of the room’s space, being comprised of a dozen irregularly stacked washing machine-sized cabinets and a console unit mounted on a reinforced cake trolley. The outermost cabinets were open-fronted, their switches, dials and sockets bared for all-comers to see. But, by Turing’s account, visitors were rare: it was a personal project, he had few trusted allies at the university, and those with whom he was friendly knew to keep a respectful distance.

Forcing my way into what tiny working space the room held (between Turing, myself and the cake trolley, not one of us could move without adjusting the others), I ran my good hand over the flickering lights of an output panel. The machine vibrated invisibly, and I closed my eyes to better assess its sound life, the most prominent features being an unmusical inner roar and a clucking sound that I couldn’t place. I sensed Turing bristle at my shoulder and with some difficulty lowered my arm to my side.

'So this is it then?' I asked, raising my voice over the din. 'The electronic brain?'

'Please don’t call it that.'

I continued to stare at the electronic brain, unsure what to say.

At length, I asked Turing, 'Can it think?'

'Ask it?' I looked the steel towers up and down. 'But how would it know?'

Turing side-stepped the issue: 'It’s just one way of looking at your question. If ERIC52 can convince you it thinks, to the extent that you would be unable to distinguish its answers from those of an intellectually functioning adult human, then who are we to say it can’t think?'

Turing turned on his axis and pulled me by the sling until we were back to back, with him facing the console trolley and I, the brain. I was to put my questions to Turing, who would feed them into the brain via teleprinter tape. Turing would then translate ERIC52’s answers, which came back as dots on a  cathode ray tube, into the new Queen’s English. As such, the reader should note that the following interaction took place over the course of six and a half hours:

OKAY. WE KNOW WHERE WE STAND THEN.

I revolved until I was facing Turing and told him, under my breath, 'Your machine does not think.' He ran his finger along the cathode ray tube, apparently deep in thought.

'No,' agreed Turing, without turning to face me. 'But he does seem a little more chatty than usual.'"

The Institute will be publishing full chapters of Harley Byrne's memoirs, UNIVERSAL EAR, in ebook format later in the year. To be kept up to date, please join the UNIVERSAL EAR Facebook Page. For further information, visit the official UNIVERSAL EAR website (work in progress).
Posted by Mr Cole at 10:41 No comments: