Preparations gather pace towards the production of an artist's video in response to my residency at Kino Klub Split: baffled by words, feelings, ellipses, images and impressions, I've penned a pseudo-screenplay about a desperate videophile of the future, roaming the abandoned city in search of off-line VHS footage with which to soothe her prosthetic eyes - whose license has expired, making them criminally allergic to internet.

Recce and casting: our cyborg video hunter will be played by fabulously noir-voiced Edita Momić. 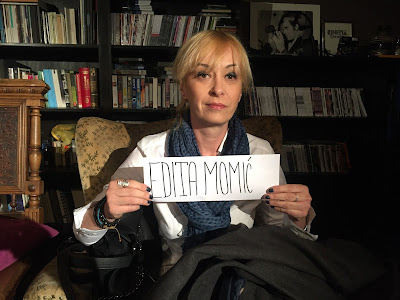 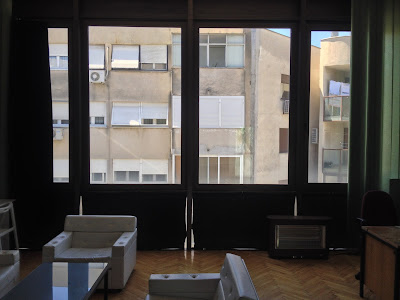 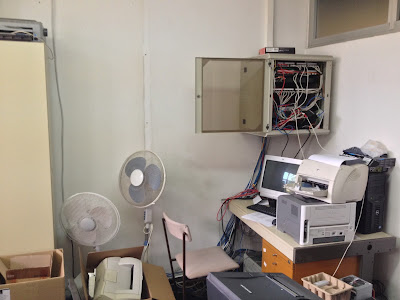 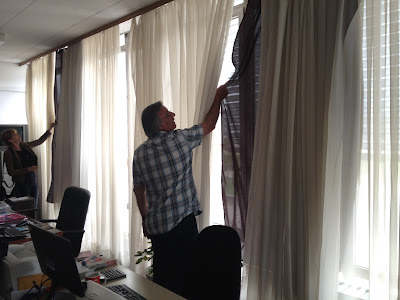 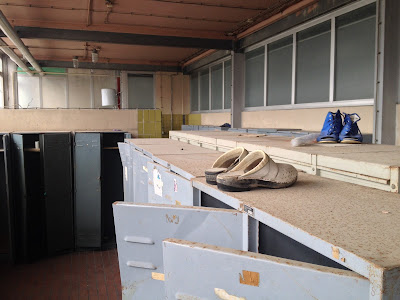 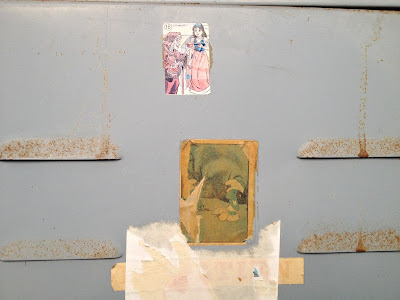 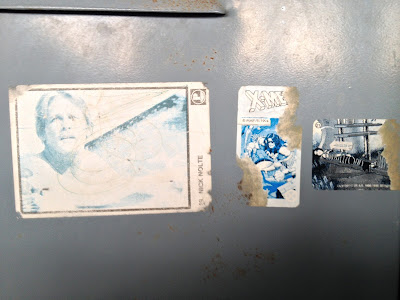 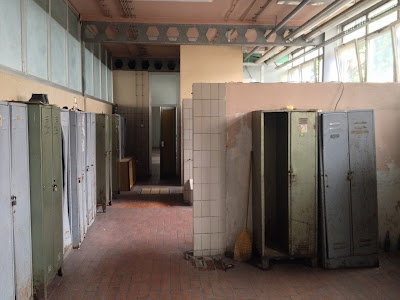 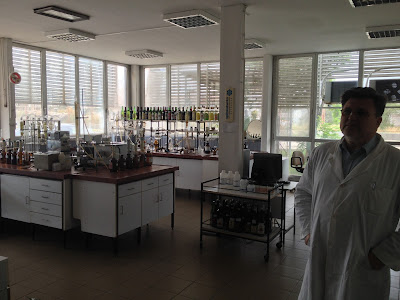 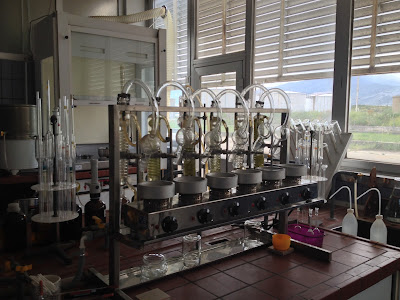 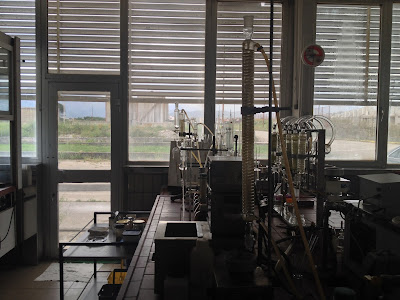 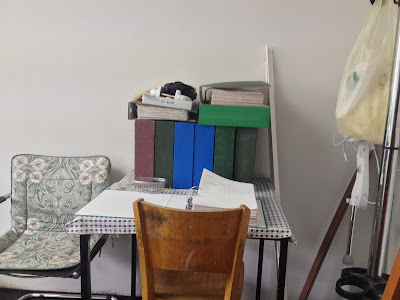 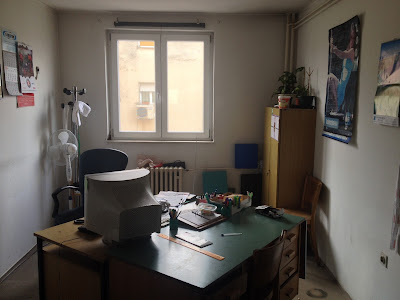 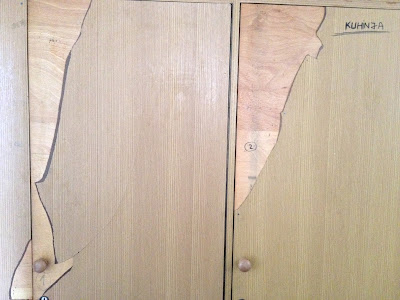 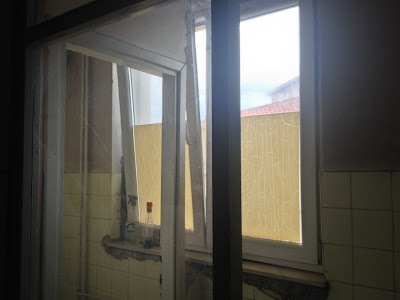 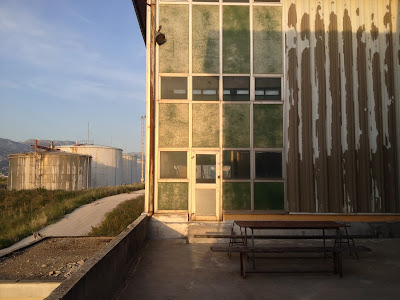 Tudor is inspiring for his irrepressible enthusiasm for everything. Introduced to me as an 'actor', all this really seems to mean is that he studied acting and now uses his body as tool, object and subject for a range of freely associative and rarely completed projects - inhabiting an abandoned display case outside Split's United Colours of Benetton, sitting Stylites-style half-way up a wall, creating suites of furniture from discarded plastic coffee spoons, tinkering with this or that to see what it could really do. In some ways he reminds me of Richard Widmark's existentially-stranded Harry Fabian in Night & The City, the description of whom as an 'artist without an art' I return to again and again; except that Tudor is an artist with too much art, a co-puppy frustrated by his inability to get things finished, because there's always something else to do, and never a good reason to apply the brakes. I toast you, Marin Tudor (Marin, tu dor!). He is also more than adept with a projector, creating living slides from chemicals and whatever else he finds; he will come on board as projectionist and smoketographer for my forthcoming video shoot. 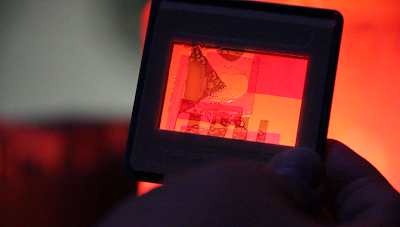 Cokarić, he of the robotic Dalmation donkeys, is doing his bit for donkey preservation: meeting him on a tour of the mostly (thankfully) defunct local zoo, up in the Marjan hills, he explains that the particular lineage of asses in this part of Croatia has a noble history but faces its end having been out-evolved by the motor car. With a depth of artistic and ecological insight that is surely not lost on these wise creatures themselves (reader, you are encouraged to delve further hereabouts), Mr Cokarić is working on developing the surviving donkeys - and, hopefully, their manifold descendants - into a super-breed of mountain-climbing video edit suites, generating their own power in the unconnected wilderness, and carrying all a nomadic filmmaker requires to produce artist's moving image on the go (one of the donkeys is named “Marina Abramović”). The Chthulucene will be televised! It would be wonderful to establish an itinerant art residency on a donkey's back, it's only a shame I don't have the time - as my Kino Klub residency draws towards its end - to further explore the blurry lines between amateur, industrial and avant-garde in the context of these gloomy cyborg editing stations. 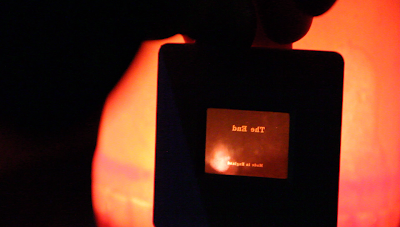 Out to shoot the wind, but the rain stole the show. The elements make for a flaneur's shot list: the shape of the city mutates when you're hunting for meteorological rather than economic or social currents. Split is full of - almost structured around - strange dead spaces, squares that no-one gathers on, paths that are crossed only laterally, semi-abandoned brutalist playgrounds, idealistically composed but lifeless would-be social spaces. There's another movie in there, or perhaps an opera of echoes; but for now, we follow the wind. 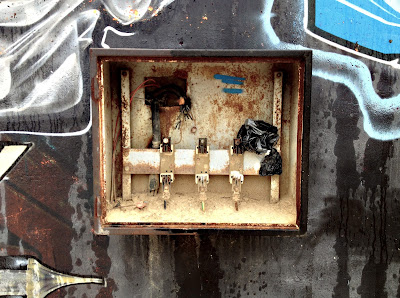 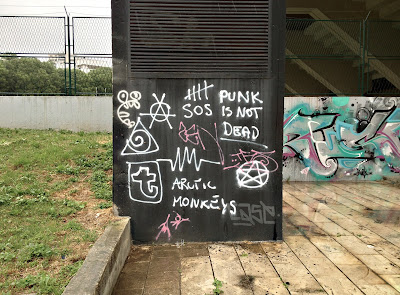 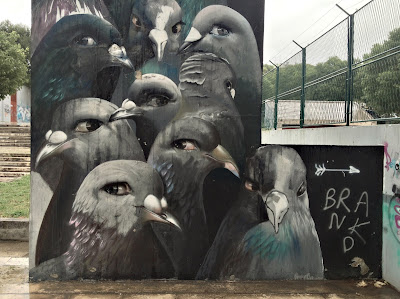 Mihovil Pansini called his Zagreb ‘anti-films’ a “visual acoustic phenomenon” but it is the middle word that best evokes the feeling, of vibrations on air, of an architectural space to be filled, of an in-between rather than a finite surface. His opposite number on the coast, Ivan Martinac, regarded his own pictures as “films of state”, pyschogeofilmic distillations of a/the “shared otherworldliness” of Split on small format stock. Despite my narratively-oriented work, I feel closer thus far to these Croatians than the distant Belgrade Klub with all their ‘plot’ and “unembellished reality”. It is not so much that I have lost the plot, as that it has dissolved: in the spirit of Martinac and Pansini, hoovering up their images with scant regard for causality, and in unnerving contrast to my infamous Nexus residency in which I literally pre-scripted every minute of the whole three month trial, I have drifted these weeks, absorbing information and experience like a sponge, releasing pungent drips when squeezed by the participants of the Unfound Peoples Videotechnic.

The workshops have progressed well: the participants are broadminded, self-determined and curious, with a healthy dose of dissidence. Despite labelling this inaugural program UPV’s ‘Alpha Semester’, though, it remains very much a beta proposition: I am as yet unsatisified with both form and content, but these are early tests that need to be made, the felling of outlying trees (with attendant squirrel carnage) necessary to get our tractors to the rich bounty at the heart of the forest. We have, I believe, struck a nice balance of my meaningless English-language blather prompting homework assignments of serious enquiry inspired by mis- and partial-understandings of the obscure words and unstable theories asserted in class by a professor who must, above all else, profess to be a terrible speaker.

The Institute’s enemies will be bitter to hear it’s going so well that we have decided to extend my time at the Kino Klub for a few extra weeks. Research into the culture and history of the Kino Klubs, combined with preparing the workshops, has eaten into the time that I had hoped to devote to putting a new video together. Inspired by those historic enclaves of young (mostly) men, engaged in their ideas and their surroundings, creating and solving their own artistic problems, entitled, imprisoned and inspired, I hope I can work something out with their (mixed) spiritual descendents. As a pack-dog, a member of one official, one unannounced, and thirteen secret artist collectives, anyway, it is an unpassable opportunity to hole up in a Klub of huge cultural importance for a few weeks, to steal and to leak esoteric techniques and forge some irreverent tribute to the Yugoslavian ‘amateurs’ who changed the direction of Balkan film and art. I hope to warm up the sensors in the first couple of weeks of May. 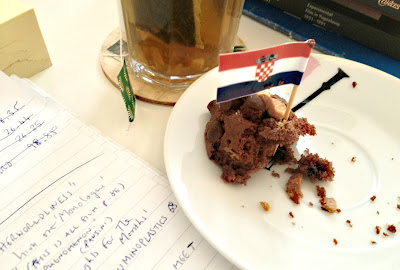 Gastrodimensional cake-chart illustrating total of work yet to be achieved.
Posted by Mr Cole at 22:56 No comments: