The online availability of two of the Institute's Bosnian-made pictures has shifted dramatically in the past few weeks.

Epizoda ? can now be watched for free on Vimeo. This absurdist detective show pilot was written and directed by Graeme Cole at Béla Tarr's film.factory, and was previously available for VoD on Tao Films, an art film and 'slow cinema' platform, which is currently enjoying a creative pause.

Murmurs is available online for the first time, to rent or buy on Vimeo On Demand. The ASMR-tinged experimental feature film was also written and directed by Mr Cole at film.factory, and just like Epizoda ?, features Elma Selman in a leading role. The male lead is the Institute's regular player, Stewart Lockwood.

A TV detective who's lost the plot drives aimlessly around the city. Negotiating time and space seem achievable next to solving a murder in a factory, the only witness a robot with the ability to get under the skin with its only two programmed lines: “That interests me” and “What are you afraid of?”

Hana is an ASMR artist, creating intimate videos for millions of online followers – and she hasn’t left her house for 18 months. Ed is a remote security image analyst, and Hana’s first online hook-up. When Ed arrives at Hana’s home, they begin to nurture an awkward togetherness. But for these lonely weirdos, building trust might take more than endless days of cooking and fucking. 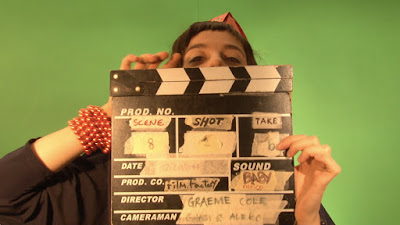 Posted by Armend Morsellino at 21:33 No comments: