It is not uncommon, in the world of television and the cinematic serial, for the producers of a new show to create libraries of their main characters’ tics and poses, in effect "backing up" a serial's stars in case they should become lost or disfigured before the end of the run. We certainly believe this to have been the case with the original UNIVERSAL EAR, for not only did director Francis Dove place no value on authenticity of emotional performance, he planned to create entire unofficial episodes using just off-cuts, bad takes and whatever other footage he could get his hands on without alerting Harley Byrne (who played himself in the original) to his scheme.

So it is that, one week into the Institute’s short-lived Universal Ear Studios venture, I opened the day’s work with a brief lecture on the science of facial expressions, ahead of a planned afternoon of filming stock emotions for the UNIVERSAL EAR-remake library. Truth be told, I had pretty much thrown the speech together in a bar whilst waiting for Lockwood to get home with the keys the previous night, but all the same I was somewhat put out that he failed to take Duchenne seriously until the latter’s name cropped up in the former’s Acting Basics book a few days later.

There is clearly far more work to be done on this subject, and it is one of my great regrets of the Universal Ear Studios era that we did not have time to spend more days like this – speculating and creating standard parts, rather than zealously pursuing the completion of entire episodes. (A transcript of our ‘therapy’ session from that day’s end is available on request).

The lecture was open to the public without entry fee, but only Lockwood attended. I positioned myself between him and the door:

Faces, Electropuncture, and the Actor’s Craft

“Whilst facial expressions are thought, with a few ambiguous exceptions, to be universal (cross-cultural), the different proportions of an individual’s face can cause confusion. For example, somebody born po-faced might not necessarily be miserable – it’s just the way their nose came out.

As such, we calibrate our own minds to read the faces of people we know – to make minute personal adjustments to the rules their faces generally play by - and this also applies to the familiar stars of a regular adventure serial. We know, as it were, what they can achieve with their face, and we understand their feelings within those parameters.

There are three alternative processes, to my knowledge, to elicit a facial expression:

Above: polished-up diagram of 3 methods for eliciting a facial expression (terms in brackets refer to what can go wrong with each process). Below: two charts to each be considered synonymous with the above.

Concerned as we are here with controlled methods of production, we shall naturally consider following the ‘science’ route, as pioneered by Monsieur Duchenne, who would isolate and faradize the facial muscles of his heroic volunteers in order to learn more about the mechanics of emotional manifestion – face-wise. Duchenne de Boulogne (1806-1875) believed that one could not read moral character from facial expressions - only emotions. However, we can posit that a series of such emotions – frame by frame – in the context of a particular narrative and aesthetic surroundings, allows us to at least attempt a moral or dynamic emotional analysis: and this is Cinema.

The danger, though, is to assume that cinema – or rather, photography – is Truth. It is not. It is  re-presentation, pixels or photons splattered onto a 2-dimensional screen. As such, this is what gives us license to manipulate the human face-image as a collection of symbols that hint at a real human face whilst referencing broader visual codes, from colour and geometry to landscape or circuitry. But we only have so much time today… and given that Mr Lockwood is interpreting Harley Byrne’s reinterpretation of Byrne’s own real-life experiences, we might do best to adopt (however multiply-filtered) verisimilitude as our aesthetic priority.”

So the lecture ended: and indeed, without verisimilitude of circumstances, verisimilitude of emotional expression was no picnic. My attempts to inspire Lockwood’s emotions with a range of condiments (salad dressing &tc.) or with carefully chosen images from a favourite book of mine were controversial at the time and remain a bone of contention between my muse and I to this day. However the results – if they do not speak – sneer, cower, spasm and thrust for themselves.

Please note the music is not our own work but has been shamelessly checked out from Pietro Grossi's Electronic Soundtracks library music LP. 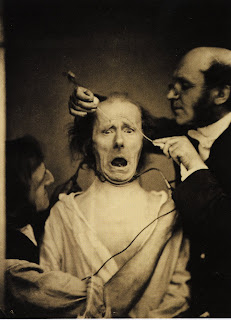 Down The Rabbit Hole: watch online

Dazzled by the bright lights of Facebook and Twitter I forgot to tell you the parade film previously alluded to is now complete and ready to view online.

Here it is, anyway, complete with original song by Aidan Smith.