IndieLisboa'13: The jury's long since returned

If you've been following the Institute's other social networking platforms closely, you'll already be aware that at the end of April I was honoured to be part of the international short film jury at IndieLisboa'13 International Festival of Independent Cinema. (Our short musical It's Nick's Birthday received a Special Mention from the Jury at IndieLisboa'09).

Along with my esteemed fellow jurors Inês Nadais and Tess Renaudo, we saw over 70 short films before talking, eating, drinking and dancing ourselves to a verdict. Thousands of € and millions of prestige were bestowed upon our chosen ones: a full run down on the winning films can be seen below, or here.

I elaborated on some of the recurring themes and stylistic tendencies of the program in a fascinating piece over on Neil Young's Jigsaw Lounge. So read that. 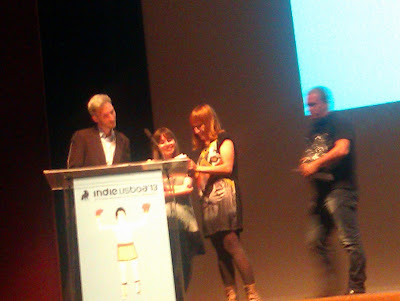