nb: If you are not trained in the interpretation of psychogeographic metering I recommend you start the video and let it play while reading the notes below. It is not meant to be entertaining.

Technical Notes
I AM SO SORRY

It is often said that a film or video should stand up on its own, unsupported by the post-rationalisations of its progenitor. I don’t necessarily agree with that, but anyway in this case the movie is a mistake and I feel I owe you an explanation.

Last week I set out to edit our short film of the Nexus Art Café float at the Manchester Day Parade 2011. The footage had been shot on Super 8 film and transferred, out-of-house, to digital, and I had watched it back in the latter format without any problems. However, when I then imported the same digital file into the Institute’s post-production engines for editing, I was confronted with the images you see in the above video. Something had gone wrong. I assumed it was me.

My first instinct was to delete the file. But since a lot of my work here at the Institute involves the recovery of lost films, I took pity on whatever future-me might have the job of reconstituting the canon of ‘unintentionally datamoshed parade movies of the early twenty-first century’. I saved him or her a job by saving the corrupted file. Anyway, when one ‘deletes’ a digital file it is not actually erased, but only marked for overwriting - and so, if data-energy is never truly destroyed but only restructured, might I not learn more from my mistakes by taking responsibility for restructuring the file's raw information myself?

I set about charting the binary ruins of the video, and it was not long before I began to notice a familiar pattern. Having seen the uncorrupted rushes of the parade, I recognised amongst the rearranged pixels a visual echo of the route we took. There, through the luminous video-fog, could be made out the streets and buildings and the dancers and even some of their moves. But, in addition, the newly fragmented pattern seemed to channel the conflicting feelings I felt on the day:
Somewhere between committing the images of that day to film, and translating it into a digitally manipulatable form, it seemed that the movie had become corrupted moment-for-moment by the emotions I felt on parade. How?

You will remember (and it doesn’t matter if you don’t) that for three months over the summer of 2010 we were asked to vacate the Institute while one of the major search engine companies mapped the dynamic emotionality of the premises for its latest online cartography resource: a (still) unnamed(*1) psychogeographic atlas of the known universe. It so happened that, as they worked in our absence, several expensive pieces of their psychocartographic machinery were irreparably blown due to incompatibility issues with the Institute’s wiring. The workmen dumped the remains in the Institute’s gardens before they left, and since that summer our IT manager(*2) has frequently raided this abandoned equipment for spares. I asked him: was it possible that some kind of ghost codec had hijacked the parade file and decompressed its latent emotionality? Some frustrated algorithm designed for compressing psychogeographically-metered video, now released from its silicon purgatory by the integration of its motherboard into the Institute’s hardware infrastructure?

He told me No, it was not possible, but that as emotion is a matter for the heart and meaning is created in the mind - and if it would make me feel better - I could certainly ‘read’ the video as some kind of pseudo-scientific videograph of the emotions I felt on parade. This did in fact make me feel a bit better. Then he pointed out that nobody else was going to see the corrupted video anyway, which made me feel worse again - yet more determined to salvage the thing.

The moving images were saved by mere fact of their re-contextualisation. By considering the broken video from a psycho-transitionary angle, it had meaning again, without even needing to be ‘restructured’. But it still wasn’t much fun to watch, and it needed some sound. It would be dishonest to create and sync up a psychogeographic soundmap after the matter, and besides I didn’t have the processing power to facilitate such an endeavour. Instead, I thought about a song.

The idea of chance discovery and the turning of unfavourable circumstances to one’s creative advantage called to mind John Cage’s invention of the hacked piano, or ‘prepared piano’ as it was known at the time. It is a story that he recounts on Indeterminacy, a recording of 90 one-minute tales ranging from composer-clique gossip to Zen parable. Cage was the most important composer of the twentieth century but he died without hearing the word ‘Pro Tools’. So I decided to rip/sample/steal this most pertinent anecdote of his and add a beat: time, rather than tone, being the fundamental index of music; and beat music being an instant fix for unwatchable movies.

In the original recording of the story, Cage solves a technical problem - how to create percussive music in a room where there is only a piano - by opening up the piano and attaching objects (a pie plate, a nail) to its strings. I decided to hack the narrative so that in the remake he solves the initial problem but creates a new one, accidentally inventing Dance Music (rather than music for a dance) and being unable to un-invent it. This unhappy ending, this punchline of undesired creative productivity, brought the anecdote closer to my own experience.

The audio facilities at the Institute are less than ideal. The track was put together using Audacity 1.2.6 on an iMac with a 600 MHz G3 processor and 256MB RAM for your listening pleasure, though it might have been easier to use tape and scissors. Bring on the interface city where a gesturally operated Protools XI will be embedded in the ambience of bus shelters! In addition to the Cage number, The John Cage Bounce (as the new song was christened) samples The Rose by Nine Circles and Martin Denny’s March of the Siamese Children. There is no original sound.

(*1) I suggested they brand it [search engine company name]Hurt. But by the time they read my email, they had apparently lost interest in building a personal rapport with the Institute’s staff and the series of cold but suggestive replies I received seemed to have been generated by a bot or similar
(*2) whom I detest
Posted by Mr Cole at 13:10 No comments: 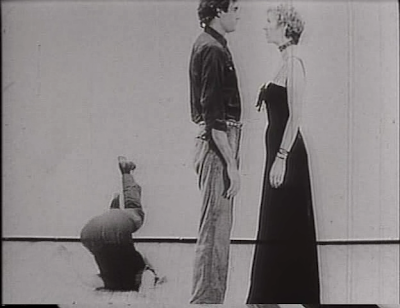 Previous Entry - Glossary Index - Next Entry
Posted by Mr Cole at 16:49 No comments:

Miscellaneous Fragmentary: Do You Understand?