An entry in the Glossary project
As a former trapezist who had swung and dangled voicelessly over the abyss night after night and year after year to the gasps and cheers of audiences, Nanneman really had no idea what a scream was for, or even whether anyone actually did scream outside of the movies. Understanding, however, that the "woman's scream" was an essential part of the filmmaker's toolbox, he set Hanni the task of compiling a library of "one or two dozen" recorded screams in a variety of styles and meanings to be used by the Catalogue's computer-generated characters in appropriate situations.

It seems that Hanni already had a source in mind for the recordings: Serafina Kustra, a "scream musician" of sorts, a folk hero in a binary age whose live performances people would travel from far away to witness. Kustra had previously achieved mild fame fronting a band whose entire repertoire had consisted of songs built around repetition of the band's name and lyrics extolling the group's merits in very general terms: perhaps her messianic appeal as a solo artist can be attributed to the simplification and emotional inversion of this approach. Hanni, idolizing Kustra for reasons she never publicly articulated, offered the vocalist a not inconsiderable sum from the Catalogue project's unofficial city council fund, rationalising the gesture to Nanneman by suggesting he himself could provide the male screams at a cut rate. It is unclear why Nanneman failed to nip this plan in the bud given the expense and his desire to distance himself from the scream-cataloguing process, but perhaps he sensed that the issue was important to Hanni.

(Nanneman was not the only filmmaker of the time to be squeamish about vociferation. Jobbing director Francis Dove, who would generally work with scripts imposed on him by producers, kept a list of alternative non-linguistic utterances with which to replace a scripted scream on set. Dove acknowledged that a written scream is usually structurally important, with its removal potentially undermining a moment of climax or catharsis. However, he discovered that the straight replacement of such a scream with (for example) a laugh, a sigh, a raspberry or snort, would enable him to maintain the structure of the written scene while destabilizing its underlying assumptions. If, having filmed such a substitution, he found that a scene no longer worked, it was not uncommon for Dove to edit the vociferation and even the actress out of the entire scene, leaving murderers stabbing at thin air, rabid beasts howling at dumb walls and in one case the spontaneous materialisation of a pink, wet newborn on the back seat of a moving taxi.)

In the event, Serafina Kustra turned down the job of providing the Catalogue's screams, refuting in no uncertain terms the idea that her vocal style had anything to do with screaming, and taking deep offence at the suggestion that a selection of her most intimate and heartfelt vocal performances might be defined, categorized and donated to computer-generated movie characters. Respecting this position, Hanni instead recorded and labelled 144 wildly varying screams of her own, and finally cajoled Nanneman into providing one single scream for men, although it was recommended in the small print that the latter never be used. 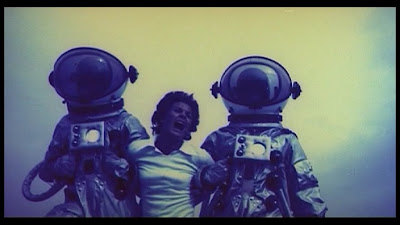 Previous Entry - Glossary Index - Next Entry
Posted by Mr Cole at 11:40 No comments: