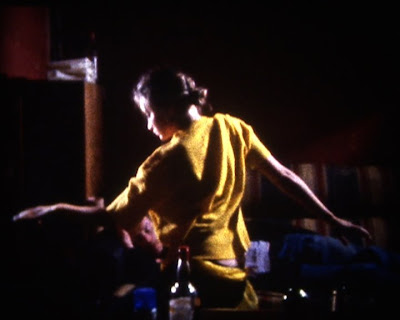 A home-made Super-8 musical. Over an all-day drinking session, the dreams of a troubled romantic and his companions are worn away by ennui and isolation. With songs and dancing.

Capturing the unconventional handcrafted aesthetic of Aidan Smith’s songs, this is a musical for those who wouldn’t normally go near one. The dancing creaks and the vocals strain when four ordinary folk attempt to impose meaning and colour on their mundane and aimless lives. Sundays don’t come with a three-act structure, and we don’t have hidden reserves of magical talent: we have mood swings, private theories and temporary epiphanies.

The film was shot in early 2007 and has been waiting patiently for release while the post-production crew’s intense sleeping schedule and neurotic imperfectionism weaved their influence into the finished artefact. It’s Nick’s Birthday will receive its public premiere in Hull (home town of Nicholas D. Hill – the aeroplane enthusiast, misfit and L’Institute Zoom bit-part player who inspired the title character) this Wednesday 22nd April.

Next stop on the It’s Nick’s Birthday mini-tour of European ports is Lisbon, where the film will have its International Premiere next Sunday, and a further screening on Thursday 30th.
Posted by Armend Morsellino at 22:00