It's always a worry when we welcome new collaborators to the set. I try hard to prepare them in advance for the adjustments they will have to make but only experience truly does the job.

Our new sound recordist, Martin Salomonsen, has also had the luxury of a briefing from his predecessor "On The" Mike Cacioppo, who has fled the country with the episode's guest star Amanda Belantara. (Luckily we already got her shots). Thus, when Martin is the first person on set and I arrive apologizing that it's become apparent he will be working against tremendous noise from our host cafe Takk upstairs, he takes it in his stride. With a bit of schedule re-jigging, we decide we can incorporate the Northern Quarter's chattering, MacBook-tapping hipsters as 22nd century Olympid Games-goers.

Mush, however, who has joined us as unofficial art department head, casually mentions that she used to do this sort of thing "for real" and politely asks if we always just make it up as we go along. Mush's first job of the day is to make the Institute's contract starlet Tuesday Betts look like Ernest Borgnine. Mr Borgnine is the inspiration behind the disguise Bett's character 'Being' adopts for this episode of UNIVERSAL EAR. This is precisely the experience it takes to recalibrate our new artist to the Institute's way of doing things. With a bit of patience, a bit of fleece, a pair of tights and some tit tape, the job is soon a good'un. 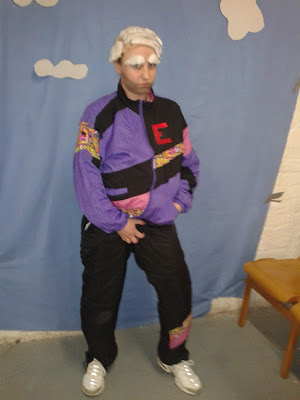 Further illustrating for Mush the improvised nature to our schedule, Executive Producer Sugden arrives out of the blue with 5-year old Rudie, the latest in a line of UNIVERSAL EAR child labour. Rudie nearly misses out on his big break though when he proves too short to show up on any of his cameo walk-throughs. Rudie's main role on set today will be to keep our adrenalin up by repeatedly donkey-kicking a rubber ball prop (meant as a punch bag) at our last functioning movie light and at Doris herself, our now legendary Super 8 camera.

We're nearly thrown when I unwrap a brand new, foil-sealed Super 8 cartridge and find it's already been 'Exposed'. Betts speculates that perhaps it contains the missing Egyptian episode despite no mortal hands (outside of the Kodak organisation) ever having touched this virgin film. We'll find out in time as I managed to muddle it with our legitimately-exposed cartridge so will now have to get both processed.

Somehow, all the above-noted instability is transformed into action and despite not firing our first shot off until halfway through the day, for the first time ever we manage to get every shot on the list made before kicking-out time. Perhaps it was something to do with creative entropy and strange energy. Perhaps because we saved time on hairdressing when no-good sell-out Lockwood insisted on preserving his hair and jeopardising the iconic look of UNIVERSAL EAR hero Harley Byrne in the name of some big-time commercial shoot next week. Either way, we're surely due for a big post-pride fall on Day 2. 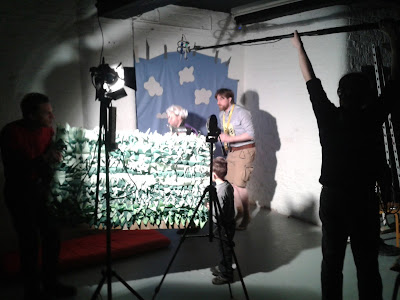