Monday, Day 3 of the Banned Insubstance reshoot in our temporary studio in the basement of Manchester's Takk coffee house.
The guest stars for this, the most expansive UNIVERSAL EAR episode so far, are starting to pile up: today we welcome Aidan Smith to the set - the Institute's staff composer, responsible for the soundtrack to our musical It's Nick's Birthday and the flea orchestra in A Flea Orchestra In Your Ear. He is to play Hector, another competitor in the Bash Walk event at the 2112 Olympid Games, who attempts to block hero Harley Byrne's progress with the quite legitimate use of a croquet mallet. It is not difficult to see that Smith has been awaiting his big chance to exorcise his inner actor: when he is directed to racewalk on the spot, he keeps enthusiastically speeding off out of shot. Our races are filmed on the spot for a reason: our original Nexus Art Cafe studio was too small for panning shots - or wide shots - and despite our new gaff being at least three times bigger, we've naturally nested into a Nexus-back-room-sized corner.
By the end of the morning, he's standing where he's told, gnawing on his croquet mallet to intimidate his rivals and smeared with ketchup-blood, a statuesque vision of Extreme Future Sports beyond anything imagined in the likes of Rollerball or Death Race 2000.
Once Smith has turned in his performance and departed to put in a few hours at the library, just Lockwood, soundie Martin Salomonsen and myself remain on set. An efficient afternoon of pick-ups is planned, and instant progress is made when I inform Lockwood we are to start with three shots from the opening sequence, and he replies that we already filmed them last November. Did we? He has a good memory of it, or at least being in proximity to some of the props needed for this scene; I feel I must have had a good reason for scheduling them for today, but decide to trust my leading man. Instead, we erect a blue-screen studio that perhaps more closely resembles a padded cell, for our first attempt at chromakeying with Super 8. We'll see if it works when we get the footage back in a few months. 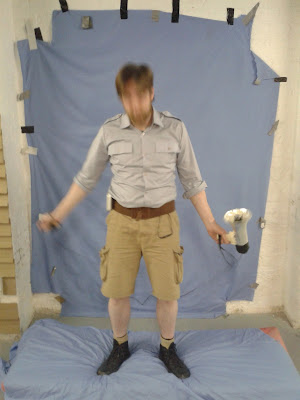 The most ambitious set-up of the day, however, involves shooting the reverse angles of the seduction scene we began last November. On that occasion, I had to body-double for Lockwood who was off sick; his character, hero Harley Byrne, confronts a corrupt National Olympid Committee official, Yolanda (played by Amanda Belantara) but is seduced before he can complete his line of questioning. Belantara has since skipped the country, so now we have Lockwood's face back for the reverse shots it falls to myself to once again step up as body double, albeit this time in place of someone half my size who looks much better in the required little red dress. (Although I still look pretty good, causing some introspection amongst the more or less heterosexual Lockwood and Salomonsen).
With me sitting on Lockwood's lap and Salomonsen's hands full of boom pole, this leaves no-one free to operate Doris, our Super 8 camera. Doris has no video monitor, just a tiny viewfinder, and no workable record lock, so Salomonsen body doubles as me body doubling as Belantara while I frame him up in a shot that I will be able to record myself when I retake my place from him on Lockwood's knee. It works: I even have a hand free to tune Lockwood's performance by fondling his pectorals, though I don't know how this will match with the rest of the scene as shot last year.
Every day of this shoot we've managed to complete the shotlist ahead of time. Granted, there have been shots cut, in one case half a scene (yesterday, when we were running out of Super 8 stock with no shops open and it being UNIVERSAL EAR villain-actress Tuesday Betts' last day on set) but never due to time restraints. If one ignores the fact that we already passed the end of the original schedule last November, one might almost claim we are "getting better". Or at least "getting quicker". This is just one of several worrying trends that suggest the UNIVERSAL EAR project needs a whole new set of techniques next time we tool up. Another being that whether he's dropped into a padded blue-screen studio or fondled by his director, Lockwood is starting to look all too comfortable.
Posted by Mr Cole at 22:47