An entry in the Glossary project
Nanneman’s Catalogue removed the trial of working with actors from the filmmaking process by creating the possibility of generating endless, digitally powered variations on just two pre-recorded performances (those of he and his second wife, Hanni). For a journeyman director like Francis Dove, forced to continue working with real actors and often with little say in the casting process, Nanneman’s reductive approach was understandably appealing:

"Could we postulate that, for those of us who cannot or will not utilise Nanneman's toolkit, there remain two possible approaches to putting an actor on the screen?" asked Dove, in his trade journal column. "The first is ‘acting for the screen’, in which the actor is the screen’s "goon", that is to say they act for and in total deference to the screen. The second, more tiresome method is ‘a screen for the actor’, in which the screen becomes a canvas over which the actor may freely ejaculate his or her deepest needs and instincts safe in the knowledge that none will be wasted, all will be caught and exhibited via the familiar media.

"In the instance of acting for the screen, only a contorted sense of human biophysics is directly referenced: the screen is a two dimensional light show rather than a stage play, and instructions or ‘shapes’ (fine-tuned and categorised through hundreds of hours of laboratory work) are imparted to the actor to carry out without question. (It is a given that such direction is most effective when conveyed with a firmness that borders on cruelty).

"By acknowledging the volition of the players, the screen for the actor method allows a complex but aesthetically arbitrary, exploration of idiocy (the fundamental subject matter of any human-oriented drama). Each actor becomes yet another inlet in the convoluted plumbing of an idea from inspiration to finished screen efflux.

"Thus before embarking on a new project, I always ask myself: can I afford to gamble on the idiocy of my cast? If they unexpectedly turn out perceptive actor-oriented performances of grace and dignity, will I have the resources to fix (break) them? If the answer is No, I get out my big book of shapes.

"Finally, it might be divulged here that actor and screen are both absolutely the goons of sound: this is one of the great secrets of cinema, and sound likes it that way." 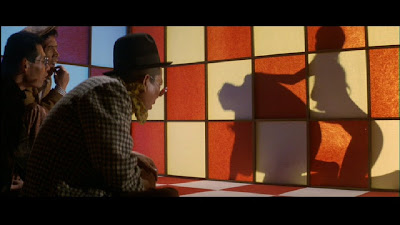