Production begins today on the fourth episode of UNIVERSAL EAR – a lost adventure serial of the future which we at L’Institute Zoom are charged with (p)reconstructing.

Harley Byrne’s ongoing mission is to record and make available for download all the world’s music, ever, for his employers at the Universal Ear record company – using his shed-built ‘Universal Ear’ recording device. In new episode Banned Insubstance, Byrne travels through time to Olympia, 2112 A.D., where Olympid athletes are using illegal motivational music to enhance their performances. Seduced and then snubbed by the corrupt Chairwoman of the National Olympid Committee, Byrne realises if he wants a shot at recording the Banned Insubstance, he’ll have to train for the games – and be strong enough to catch up with the cheats. But does his coach, a reformed ex-ear-doper, have Byrne’s best interests at heart?

Series regulars Stewart Lockwood (Byrne), Tuesday Betts (his arch enemy and mistress of disguise, ‘Being’) and Peter Easterbrook (Santiago Byrne) will return, joined by such luminaries of the Manchester alt-movie unscene as Garth Williams (It’s Nick’s Birthday) and Amanda Belantara (Sonotoki). The Banned Insubstance itself is to be reimagined and re-recorded by artpop misfits Modern Blonde.

Sets are being built in our pocket studio at Nexus Art Café today, tomorrow and Saturday. The movie shoots from Monday 12th-Saturday 17th November 2012, 11-7pm. Interested parties are welcome to drop in to the studio at their own risk. The shoot will be documented online at alltheworldsmusicever.com and in a new zine for the Salford Zine Library, which happens to be immediately next door to our studio.

The Institute has received £200 Micro Funding from Nexus Art Cafe and Artisan Manchester to do this important work.

There were over 1,000 episodes of the original UNIVERSAL EAR and we don’t know what order they’re supposed to be in. In each episode, Harley Byrne must travel to another time and place to re-discover – and re-categorise – someone else’s idea of ‘music’. He always gets his track.

The first reconstructed episode, A Flea Orchestra In Your Ear, premiered at the Abandon Normal Devices festival this August. 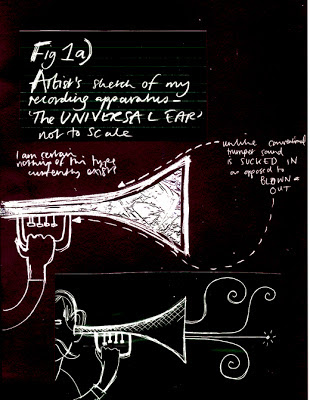 Posted by Armend Morsellino at 12:11