Saturday, 8.30am: the last day of the Banned Insubstance shoot: this evening we are to be ejected from our Nexus Art Café studio, and leading man Lockwood leaves town (and cuts his hair).

My phone vibrates but it is not the alarm clock function. It is a text from leading man Lockwood. For the third day in a row, he is too sick to act. Lockwood plays the character of Harley Byrne, whose memoirs our series is adapted from. Therefore, Byrne is in every scene. If he didn’t witness it, it didn’t go in his book. His absence is a problem.

On Thursday, when Lockwood first bailed, we got round it by replacing him with a three inch wooden doll in miniature plasticine costume and just shooting his long shots. By Friday, there was nothing else we could do this way, and the crew were all sent home to bed, with instructions not to get ill. Saturday morning, however, when the phone vibrates at 8.30am, I know we have an important day ahead with guest star Amanda Belantara: a noted filmmaker in her own right, and former high school drama queen who has taken acting lessons especially for her come-back this week. She is to play Yolanda, the corrupt National Olympid Committee official who tries to put Byrne off the scent by seducing him. (James Bond sleeps with spies to get information. Spies sleep with Harley Byrne so he’ll forget he was looking for information).

Without hesitation, I decide to shoot Yolanda’s scenes without Lockwood – to ‘film around’ him. This is the UNIVERSAL EAR spirit: gaps, inconsistencies, improbabilities, impossibilities.

11am: Belantara arrives at the studio in futuristic dreamcatcher earrings from Superdrug (so 2012 people wear such things too?) and inflates her hair to 2112AD proportions with the Super-feeble Hold spray we previously upturned in the Nexus junk room. Her husband, our soundie, “On The” Mike Cacioppo arrives minutes later, sickening for something but determined not to let us down. At several points during the day I feel the urge to embrace him for his dedication but choose not to because of the germs. 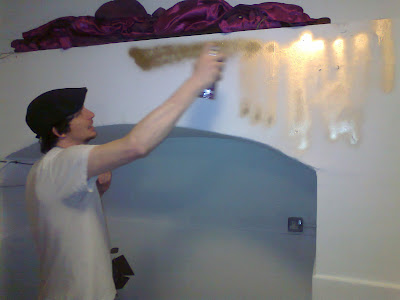 The first shot is from towards the end of the movie, when (without giving too much away) Yolanda presents Byrne with a medal for his athletic feats. How to shoot it without our Byrne? This one’s easy: we create a podium in front of our blue bedsheet sky so that Byrne’s head will be three feet higher than Yolanda’s. The bedsheet sky is by this point in the week creased and uneven: we decide this is due to some kind of environmental catastrophe occurring between now and 2112. Cacioppo towers over Lockwood heightwise, and the only other person on set today is production assistant (and so much more) Jennifer Jordan, a female. Thus it falls to me to double for Lockwood from the neck down (Byrne is redheaded and heavily bearded; I am silver-topped and sport designer stubble).

Once I’m up on the podium and we’ve blocked the scene we recall that I am meant to be the cinematographer and there is no-one else on set to operate Doris, the Super 8 camera. I call out instructions to Jordan from the podium and within minutes she is cinematographing the movie and any mystique I had as the sole operator of our mechanical eye evaporates.

The big project of the day, though, is designing and building the set for Yolanda’s office, a 22nd century lair equally equipped for bureaucracy and love. With the latter in mind, we note that the arch at the far end of our tiny studio is oddly suggestive, and elect to hang a pair of purple faux-silk curtains from (again) the Nexus junk room over a wooden frame from an ornate old wardrobe. Cacioppo, whose health is visibly fading, spends several hours trying to hang the frame evenly and centrally from the three awkward pegs a previous occupant has hammered randomly into the ledge above our gynaecological arch. 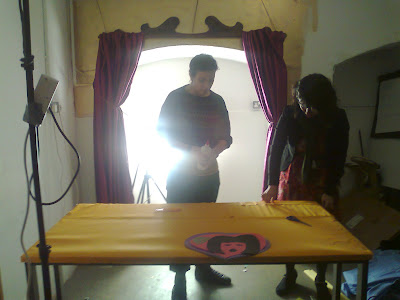 Belantara and I raid the junk room one last time for stuff to dress the set with. In Banned Insubstance, 22nd century Greece has missed out on the Singularity as a knock-on effect of today’s economic crisis. As a result, while the rest of the world is an unimaginable techno-utopia, Olympia in 2112 is meant to look a bit like Luton in the 1980s. Therefore we are pretty chuffed to find both an empty box of Black Magic chocolates and an early ‘80s hardback history of Vogue magazine for Yolanda’s desk.

Back in the studio, Cacioppo has created what is supposed to be a circular window for Yolanda’s office out of paper, bedsheet and PVC tape. He has been hindered in this process by the dripping of his nose onto his art materials. The circle is a bit flat on top and bulgy down below. “This is what has happened to circles by the year 2112,” croaks Cacioppo, and we humour him. The office, though, looks fantastic. 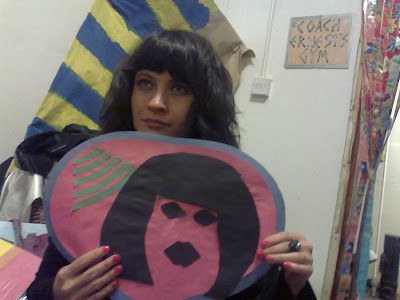 Belantara with Yolanda's personal crest
Lockwood arrives on set to get his stuff just as we are to begin run-throughs. He watches from the side, his malady now compounded by the sight of me out-acting him in his signature role, the time-traveller Harley Byrne. The credit will all go to him though: only my shoulders and one knee will be in shot. We bid the poor sod farewell and he leaves for his train. I nip into the Zine Library in the next room to get back into costume. My Harley Byrne shorts won’t stay up. “Didn’t these have a belt this morning?” Yes, I’m told. It was Lockwood’s and he took it back before he left. A final insult.

Belantara shimmers and dazzles as the strong and sultry Yolanda, a woman with a secret but who makes no secret of her desire to explore the full realm of physical and metaphysical experience available to old-skool, pre-Singularity human beings. Her attention to the nuances of vocal and gestural effect recalls the natural cinematic presence of Elizabeth Taylor, though I nearly ruin it all the first time she sits on my knee when my phone starts vibrating in my pocket. “Look, it’s my phone. Really. My phone.” Meanwhile, Jordan has created a rig for Doris out of crates and a broken old chair, so as to exploit the only possible angle from which to film Belantara sitting on my stand-in leg and gazing into my eyes without showing my face or hair.

Having accomplished this cinematographic feat, Jordan leaves to catch her coach home to Leeds; with no more sound to get, Cacioppo makes what may prove to be his last stand, prising his failing eyes open to film his wife stroking my leg. “That’s a wrap!” we yell at each other when its done (Cacioppo sort of whimpers), overlooking the fact that we’ve shot barely half the film we set out to this week and that the production will have to be powered up again in the new year. The fact is, regardless of our failures this week, today we achieved the impossible – with feathers, gold paint and snot. 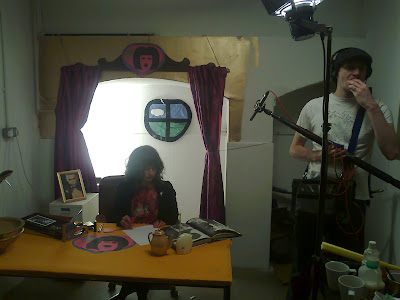 Yolanda (Amanda Belantara) at her desk; Cacioppo takes a well-earned biscuit
Posted by Mr Cole at 16:14