Tuesday: Today’s guest star has left five grand’s worth of photographic equipment on the tram: fortunately, it is his own gear and is nothing to do with our production, except that in frantically hailing a taxi and chasing the tram across town, Garth Williams has made himself late for work at Universal Ear Studios.

But we have plenty to be getting on with before he arrives. Lockwood is attempting to replicate the sky with blue bedsheets from Primark and a new staple gun which he can’t switch off ‘safety’. Jennifer Jordan is striving on with the mobile foliage unit (MFU), which must go mobile today. And I am scouring the Methodist building above for a filmable door frame. We have just one day to film Williams’ cameo. 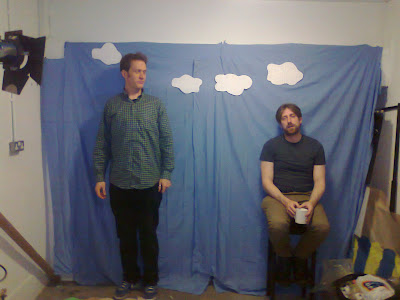 All of which playful productivity lapses into a late lunch when Williams, wide-eyed and sweating, joins us underground. It’s somewhat of a relief for me to see him like this as Williams – who had a supporting role singing and dancing in our musical It’s Nick’s Birthday – is an accomplished renaissance man, talented in many fields: actor, filmmaker, vaudevillian, a maker of fine chocolate brownies. Whilst we have a lot of talent involved with Universal Ear, there’s always the fear that someone new’s going to come on set and call my bluff. Primark sky? What are you playing at?

Thankfully, the tram incident has left Williams vulnerable and I’m able to puncture his confidence by bringing up the fact that he’ll have to perform in a fake Greek accent (I had assumed this was implicit in the script). We also put him in a skintight Adidas mono-tard and 80s wig. He is to play Evangelis, a simple but corrupt athlete in the 2112 Olympid games and the first person our hero Harley Byrne meets on arrival. Williams’ Greek accent results in much corpsing and further delays, but he and Lockwood manage to pull it together for the take. This is, of course, a one-take set – each shot is only filmed once and any mistakes are allowed to stand.

The second shot on this location sees Byrne emerge from an desktop tryst, and in order to get the required post-coital glow Lockwood disappears next door with the Nexus teddy bear again. After yesterday’s kicking, it’s proving a demanding week for that toy. 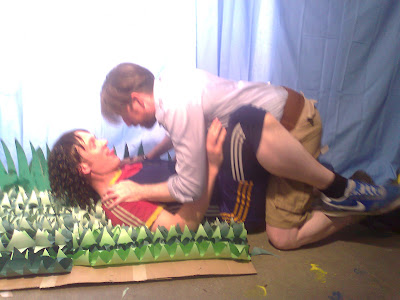 Finishing with that location gives us license to stop for biscuits, and it is only when we realise we’ve twenty minutes left before Williams has to leave that we are galvanised into action. This is the difficult stuff – the climax of the big finale in which Byrne must catch up with Evangelis on the race track and decide whether to complete his mission, or go for glory and win the race. Nexus boss Jenny O. arrives to wheel the MFU behind the athletes as they walk on the spot, creating the effect of them racing along the track without us having to leave the spot. It works!

We also get shots of Byrne tackling Evangelis to the ground, although when it comes to the critical take Lockwood completely forgets to pull Williams’ wig off – which de-robing is meant to be the big ‘reveal’ of the movie. Glancing apologetically at our sound gal Jennifer Jordan, I yell “Hair! Hair!” at Lockwood and he grabs the rug from Williams’ head, possibly just in time to save the shot – it being, as mentioned above, a one-take deal.

Compressing a couple of shots into one and getting others with nary a read-through, the energy of these climactic scenes translates itself onset as a kind of frantic efficiency, and at 17.32 we bundle Williams back out of the studio and towards his next appointment as sweaty and harassed as when he joined us five hours earlier. 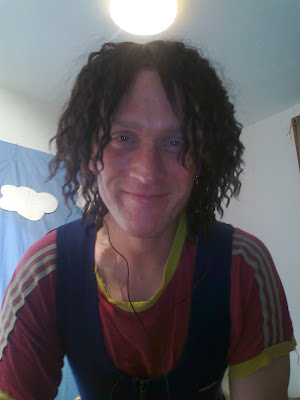