"Bloodless Offering in B Minor": an artichoke sacrificed to the heavens: duplicity: a greengrocer dressed as a priestess and a radish trader who won't get his/her hands dirty: an omnisexual love triangle between five identity-shifting Greeks, many of them not even Greek. The role of the Real Ianthe is to be played by Marie Louise Cookson, the Future Films engineer who blueprinted the episode for us - Cookson flunked an audition for previous episode "A Flea Orchestra In Your Ear", but has included her own performance as a vital component of the blueprint for "Bloodless". Cookson claims that parts of the signal she received through the modified 2D Quantum Propagada Engine were so obscure, the only way to render them useable was for her to interpret them using Acting. This EARLog is not the place to cynically question the engineering techniques of the Institute's hired help or hint at the use of professional blackmail.
Morning production meeting, and Lockwood takes the thespian context of Cookson's presence as an excuse to further ridicule my Bourbon technique for directing actors (more to follow on that). Cookson nods and smiles, and I sense that she is unwilling to compromise her screen chemistry with him by disagreeing. Cookson - and this is just my intuition - sees there is something in Biscuits, and I make a mental note that should we ever work together without Lockwood, Cookson may be the actor to try my salad dressing method on.
I cut Lockwood down to size by having Strigner trim his hair: our production designer has never used clippers before, but I assure her "hair's just another material". It's a pity Lockwood can't see Strigner's face, as the range of emotions she journeys through during the process would put a Youtube tutorial on screen acting to shame. Eventually, though, Striggers finds her rhythm and I have to switch the clippers off at the mains when she sails past "Harley Byrne"-style and veers dangerously towards "Travis Bickle" territory. 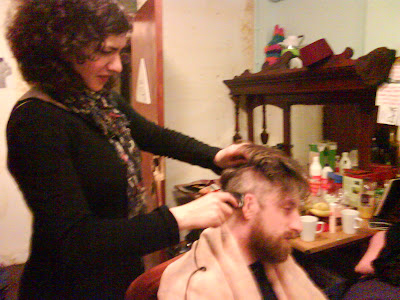 The Nexus Art Cafe 'secret' garden is dressed as an ancient Greek marketplace, Cookson is dressed as an ancient Greek radish trader. The weather over the garden is changeable, making doubly unfeasible the use of direct sunlight for the scene, as the garden forms a petite rectangle between four imposing 5-storey walls. Given that the ancient Greeks did not have glass, is using light reflected from the Nexus windows going to look inauthentic? As the crew ponder this, shivering self-consciously in our al fresco fishbowl, Lockwood thoughtfully finds a fake fur robe to drape over Cookson's toga'd shoulders. We admire the look, and - like many of the problems the production has brought up - the window issue is soon forgotten, driven away by the current of superficial concerns. We'll see how it looks in the cut.
This morning we are also joined by Adam and Sam, film grads who have wandered into Nexus and - I can only assume - been wowed by our underground movie studio set-up. Adam is quickly put to work lowering in a digital caption from Lockwood's "Stew-Cue" (the latter was pretty jealous at Elly's Strig-Rig getting a proper name), and dusting Lockwood liberally with talcum powder (on film, it looks like dust!). Sam is trusted to manage our most complex sound set-up so far with the addition of an external mic to the cassette-dictaphone we've been taping with, but first he must toss some radishes into shot - a delicate duty which he nails first time.
Ianthe is torn between her heart and loins (longing for Harley Byrne) and her brains (which have been told he is a veggie fiddler). For reasons of 2-dimensional geometry and the politics of screen pace, "hearts and loins" will be expressed in long shots, brains in close-ups - often cutting between the two during the same line. It should be noted that when Cookson - as the radish trader (a high-born priestess in disguise) - is asked to express desire towards Harley Byrne, she finds the posture technique that Lockwood has previously scorned is in fact really effective at getting her loins aflame. (If you remember, one should imagine the object of desire on a rug which must be dragged towards you, fists hip-high, whilst struggling with one's shoulders not to be dragged in the opposite direction; if - like Lockwood - the eyes still appear terrified, imagine you're at the end of your life and an old friend is walking towards you with his hand outstretched. This technique should not be attempted in nightclubs).
After lunch we cower back in the studio hoping that no-one will notice the carpet of talc in the garden. Crowd scenes next, utilising the home-made gaggle that Strigner (design) and Lockwood (therapy painting) put together yesterday. Cookson is due to stand in front of the crowd but as we are only able to get it a couple of feet off the ground, she has to "stand" perching on a cushion atop two large paint cans (the only combo that works), an adjustment that adds a peculiar tension to her performance. Cookson's technique is uncluttered: we tick off shot after shot until  we find we can progress no further without giant asparagus leaves, which Strigner quickly cooks up out of fiber-optic cables and cloth. There is to be a rare bit of camera movement in this shot but, still startled by the evocative clunk of ad lib leaves, I accidentally tilt Doris too far and take in not only flying veg and Radish Trader's heroic catch, but two cans of paint and Cookson's sport socks. There are no second takes on this shoot, so I devise another angle the sequence requires and am careful not to get carried away this time. 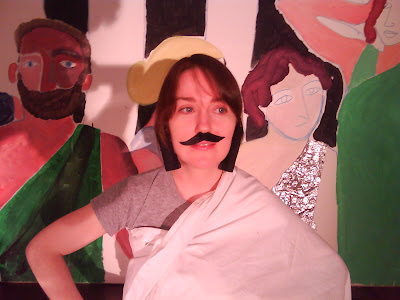 Cookson quivers admirably for her finale, and it's a wrap on today's special guest star. It's also the end of Elly Strigner's last day on the UNIVERSAL EAR set, an emotional moment as we'll miss her instant clunky designs, insults, mischievous interpretation of her 2012 alter-ego Edith Downing and all-round fine company. It feels sort of like the beginning of the end of UNIVERSAL EAR at Nexus, although we still have one and a half episodes to shoot here and over a thousand episodes unrealised beyond that.
Lockwood and I spend the evening at Contact where Dominic Berry is director and compere at Outspoken. As we stand to leave I notice a peculiar halo hovering around Lockwood's head. It is a million tiny talcum powder particles dancing in the limelight. 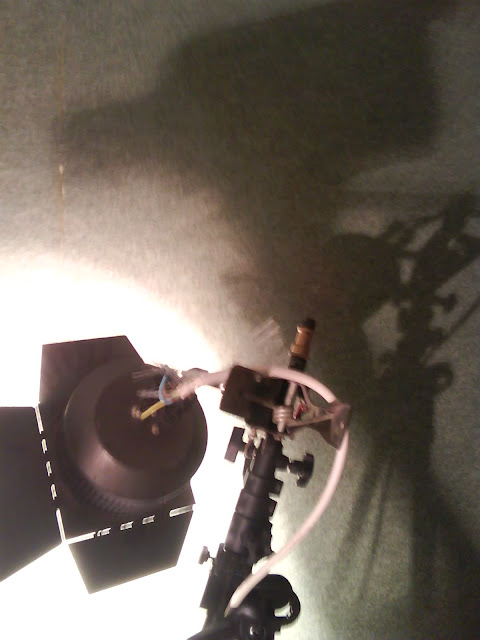