An entry in the Glossary project
The deliberate withholding of audio or visual information, usually by obscuring it with other matter (sound, set) or out of frame or hearing range, but with its properties hinted at by that information which remains. For example, the physical goings-on in a foggy sauna may only be suggested by the screams of unseen participants, the facial expressions of a foregrounded attendant or the peculiar movement of the steam.

Nanneman’s guide to the appropriate use of indirection is here paraphrased in lieu of his original text:

What you know that you can’t see makes what you can see hilarious; what you don’t know that you can’t see doesn’t bother you. What you suspect is being hidden from you makes you resentful towards a movie, while the showing of that which needn’t have been shown provokes disdain. The revelation of that which was previously hidden brings catharsis, the hiding of that which was previously visible brings disorientation. Summed up: while its excessive or insensitive use may compromise the intended effect on a movie’s audience, indirection can be a great boon to the filmmaker on a budget. 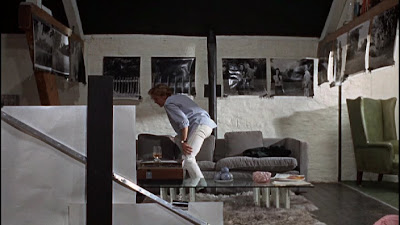