Not to be confused with their more integrative Backgrounds, the Nannemans’ establishing shots comprised a portfolio of static, un-modifiable exterior shots designed to be slotted into an edit in order to broadcast the fact of the subsequent scene’s location to the audience.

Whilst creating a test film from an early version of the Catalogue, Hanni apparently became confused over the concept of the establishing shot and ended up using the same one for every location. She was, some have speculated, so used to seeing the raw materials of the interior scenes laying around her husband’s lab in the Town Hall that, when it came to signposting the site of each interior with an exterior shot, she was unable to imagine any more suitable frontage than that of the city council headquarters itself – whether the interior that followed was that of a house or school or sports arena. More generous commentators have claimed that Hanni was in fact trying to make a profound phenomenological point: we never stray from the base of our own perception so place is just a state of mind.

The test film was unpopular among Nanneman’s colleagues, although whether this was an academic response to Hanni’s misuse of form or a visceral reaction to the unsettling viewing experience is unclear. Such was the provocative nature of Hanni’s film that several unnamed civil servants banded together one evening after drinks to create a sarcastic reply-film on a finance undersecretary’s mobile phone. Hanni’s contentious method was inverted so that, in the reply-film, a different establishing shot was videoed for each of several consecutive scenes manifestly set in the same interior location as each other. Thus a recurring argument in a fictitious if rather familiar office setting was variously introduced by images of a burger bar, a toll booth, a dog kennel, a hunting cabin, a river bed, a mountain range, deep space etc. The move backfired as the finished video, in its inadvertently emotive juxtaposition of the absurdity of modern man’s Sisyphean struggle and the diverse enormity of a universe in which we may be considered little more than mites with carpentry skills, may have genuinely countered Hanni’s solipsistic statement (if that’s what it was) but offered no less depressing an alternative. Whether Hanni ever saw this video riposte is not known, as the undersecretary subsequently took a six month sabbatical and, upon his return, was seen to have replaced his mobile phone. 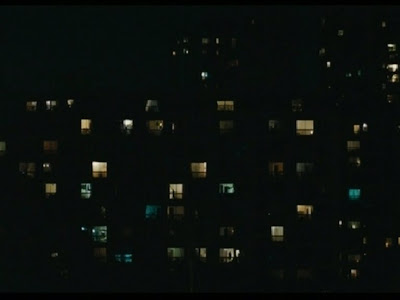