An entry in the Glossary project
The distribution of a film’s audio-visual properties in time. Nanneman, frustrated by the primitive and unquestioned rhythmic values that narrative filmmakers had always adopted for their works, provided 8 new rhythmic templates according to which his components could be arranged. While the idea was still being developed, Nanneman held an impromptu demonstration evening in the basement of Manchester’s shuttered Central Library, in which he re-cut several well-known local films to approximate the effects of his new rhythms. The occasion was not well attended, but at least two fist-fights broke out and the event marked a turning point in Nanneman’s attitude towards developing his ideas in an open forum.
Here are Nanneman’s rhythmic templates explained:
1. Rhythm of dialogue. Composed of sixty-four sub-grids in which the dialogue - with the other film elements anchored to it - could be arranged. These were mainly based on familiar Mancunian cadences but also included settings inspired by the wider world of rhythm, such as ‘tango’ and ‘bossa nova’.
2. Rhythm of feeling. Responding to the emotional pulses.
3. Rhythm of moral. Early on in the development of the Catalogue, Nanneman posited the existence of ‘moral rhythms’: complex editing patterns which, when repeated over the duration of a movie, would induce in the minds of the audience the correct moral perspective on the content therein. Nicknaming such rhythms "breathing patterns for the eyes," Nanneman hit the lab with the intention of identifying and replicating sixteen distinct moral beats, soon downscaled his efforts to the pursuit of four such patterns, and eventually finished work on just one moral (the obvious one).
4. Rhythm of light. Responding to the movement of light around the 2-dimensional screen space.
5. Rhythm of luminance. A simple algorithm which calculates the total lumen value of each frame and adjusts the duration of that frame accordingly, with brighter images passing more quickly and longer looking times for darkness.
6. Rhythm of character. Inspired by the temporal expressionists. Applying the level-settings of a chosen character’s traits to the respective time value of every other element of the film to create a complex and disorienting dance of plot, props, gesture etc. Thus the character’s relationship to each element of his screen world is illustrated through duration and repetition rather than figural proximity across the 2-dimensional space.
7. Rhythm of audience. Farming the audience’s own rhythms and processing them in real time to create a dynamically responsive structure for the pre-selected content of a film. Unsure whether this method would provide the ultimate synergetic cinema experience, or create unwatchably puerile bilge, or possibly just result in unmanageable levels of feedback, Nanneman deliberately made the instructions ambiguous and there is no recorded example its successful utilisation.
8. Freestyle. The ability to go off-grid. 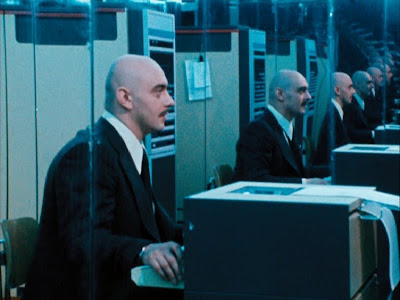