An entry in the Glossary project
In its redestructivish sense, the Implicit is the inverse of Visual Matter or, to put it another way, the essence that fills the holes in the mise-en-scene.
Nanneman stated that although the Implicit was intangible and existed only as an unambiguous natural force that would come into being between any two or more of his components once activated, there would still be a small fee applicable for its use. Hanni took to referring to this fee as a "subtext tax", although Nanneman discouraged her use of this term as it just confused things. The Implicit was an aesthetic side-effect which, whilst unavoidable, could hardly be considered vital to any movie, while the subtext was an essential structural tool which Nanneman suggested had been, since the birth of cinema, "screenwriting’s dark little secret".

For Francis Dove, Nanneman's idea of the Implicit was too weighted and specific. The gaps between screen presences were "less, even, than essence". While visual matter could be used to contextualise (not define) the nothingness that it framed, that was not the same as making this nothingness something itself. From this perspective, Dove's use of ostentatiously artificial sets, props and performances as a moving architecture of absence can be considered an acknowledgement of the futility of artistic pursuit against the dumb mystery of the universe. His contemporaries alternately labelled Dove’s work as "clunkyist" or "nothingist" depending on the part of the screen to which they were referring: he might more accurately have been described as a nothingist wrapped up in a clunkyist (as a filmmaker) or vice versa (in his day-to-day life).

Dove’s creative partner Harley Byrne, who had enormous respect for Nanneman as a thinker (but not as a man), countered that "just because the unknowable isn’t defined, doesn’t mean we’re unsure what it is," though it is possible that Dove wasn’t listening. 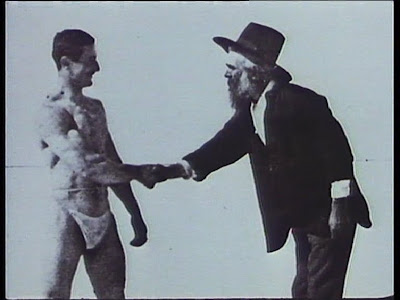