New Deal For Audiences, A

Mentioned in the Catalogue only in passing, Francis Dove’s A New Deal For Audiences manifesto was written in response to his ongoing inability to break out of TV and into cinema: every time he was offered a shot at fully expressing his vision with a feature-length, the dismal commercial and critical response would force him back to another decade or more of frustration and barely-noticed small screen subversion.

Dove printed thousands of copies of his manifesto (rather than the millions or billions it would surely take to make the necessary adjustments to the world’s movie audience) and took the fight to the front line, intending to picket Friday night screenings of contemporary box office hits but retiring mid-way through the trailers on his first night, quoted as complaining that "the problem with audiences is, they’re just people."

"A New Deal For Audiences

2. You are the centre of the universe.

3. That doesn’t make you special. It doesn’t free you of responsibility.

4. You won’t have to interact. You won’t even have to stand anywhere that you’ll feel self-conscious. But you will have to think now and then, to the extent of questioning what you know and unlearning how you watch.

5. Don’t be threatened by the unusual. I’m not doing it to hurt you or make you feel stupid, though I can’t speak for my colleagues.

6. Include the environmental factors of your screening situation (sounds, objects, light, seating, smell and people) as fully part of the film you’re watching. Accept that I put them all there on purpose.

7. The best filmmaker makes a film that requires no prior knowledge of its own or any other terms.

8. The best audience accepts a movie on that movie’s terms, whether it conforms to the previous statement or not, learning those terms if necessary whilst watching them and afterwards on the bus.

9. Some of my colleagues are responsible for making academic films. Their collective filmographies represent a conversation between academics. Others stick to a basic grammar that by itself stultifies the content and furthermore, in extension of this laziness, tend to pile the grammar clumsily on top of itself until it comes crashing down on you. They still get their point across. A third sect play it vernacular. Some of these are the academics in disguise, some are still lazier grammarians and the worthwhile ones you’ll have to search energetically to find. And even then it’s a risk if you’re on a date.

10. My duty remains, however personal, cerebral or experimental a film should be, to make you at the very least go "Yeah!" and ideally to make you want to hug yourself and those around you. The nature of the hug may vary from film to film and you will have to police the situation yourself.

11. About toilet breaks: I can’t stop you. Why not try taking the characters in with you?

12. Story is essential to the human animal, but the idea of what story is has been monopolised by our oppressors. Don’t feel you have to look for "A Story" - just be ready to absorb "some story". If you need your hits delivered at pre-defined intervals, get yourself a drugs problem.

13. About realism: the visible world is all around you. The cinema is about illuminating the invisible. You trust and worship the realists because, in photographing the natural world, approximating its everyday occurrences and hiding the artifice, they appear to be honest and serious. It takes no effort to go along with because it looks just like the outside. It is a greater and more rewarding leap of faith to give oneself up to ostentatious artificiality. Artificialists use the language of lies to search for coded truths. Your nightmares are the only important issue. Come on - you’re sophisticated enough now to at least play along with us. And laugh the earnest cavemen out of the cinema.

15. Really, if you’re not going to try, you may as well have a nap. It’s cheaper for you and saves me having to see that look on your face.

16. This isn’t an argument I’m trying to win. It is an understanding I am trying to reach.

This was just the first of several such manifestos of greater or lesser, mostly lesser, effect. 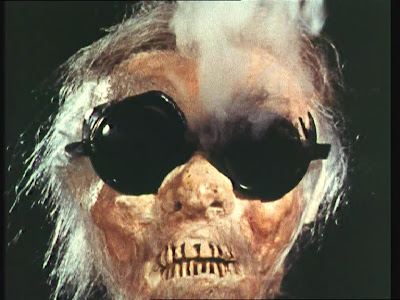