An entry in the Glossary project
On learning that all complex sounds have as their basic unit or building block the 'sine wave', Nanneman was enticed by a city council colleague into purchasing a "bundle" of sine waves with which he intended to construct the Catalogue's sound library. Although a conscientious canteen assistant intervened in the sale, Nanneman was evidently wounded by the attempted fraud as, rather than building his sounds bottom-up, he now stated his intention to carve them from pre-existing noise. (He played down this change in approach, commenting that it "[made] sense given that we’re at the noisy end" - though whether he was referring to the "noisy end" of creation at which point any naturally occurring pure tones had surely already been merged into complex sounds or to his Town Hall lab at the comparably noisy John Dalton Street end of Manchester's Albert Square is not clear).
In fact, there is overwhelming evidence to suggest that, in the event, Nanneman assembled his various sounds any which way he could: bottom-up, top-down, cobbled together, found, stolen, hummed etc. His contemporaries, however, could only speculate about the process, which was hidden from them by the temporary suspension of an interlaced membrane of tarpaulin around Nanneman’s lab, covering walls, ceiling, windows and doors and through which only the initiated might find their way before becoming consumed with panic. The purpose of the tarpaulin was and remains a case for speculation: was it hung, for example, to soundproof the lab, to replicate the circus tents of Nanneman's youth for his own comfort, or to replicate same in order to create the familiar sense of aural 'interiority' he required for his sounds? There was even talk at the time of his using the tarpaulin as a sheath to contain such emissions as might occur as a by-product of his attempts to identify and harness the "smell waves" which, so his colleagues had it, Nanneman was far more familiar with than the sonic variety and which he might therefore be attempting to synaesthesiatize into more manageable sounds using such digital alchemy as was at his service. The chief result of the tarpaulin, whether intentional or not, was then to have kept the precise materials used to generate the 131,072 discrete audio files* that comprised the Catalogue's sound bank a secret.
Each sound had the qualities of being both familiar, in having been sculpted from pre-existing noise, and disorienting for having been chosen and categorised according to Nanneman's own lonely agenda. Furthermore, as he neglected to provide compatible tools (EQ, reverb) with which to modulate these sounds according to the contexts in which they appeared, any given sound would at each occurrence sound identical to its previous use. Thus the single noise created, for example, to represent a mobile phone hitting the floor, would sound nothing like that particular event might sound in reality, yet 'rang true' through some obscure chain of association (the audience would 'get it' without quite knowing why): and should several mobile phones hit several floors in several acoustic spaces over the course of the same movie they would all sound exactly the same. Any effort to place the sound in its environment or to differentiate each event from its predecessor would have to take place in the audience's own minds. An over-used sound, lacking environmental nuance, would effectively fade with use in the passive moviegoer's mind in the same way that we gradually blank out supraliminal awareness of any repetitive alert that contains no new information. Nanneman had inadvertently hit on a way of degenerating a digital signal in a manner comparable to the degradation in quality of successive generations of tape-recording or photocopying, albeit in this case at the receiver-end. Sound engineers were reported to be "astonished and dismayed" and Nanneman himself was never satisfied with his accomplishments in the field of sound. "If only," he wrote in one of many unfiled reports to his seniors, "there hadn’t been something fishy about that sine wave deal".
*(including silences, but not ambience, dialogue or music) 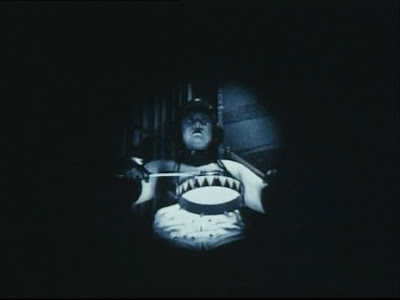