Nanneman was pressured, during a washroom encounter with his line manager, to keep to the latter's list of "16 character types (17 for an art-house film)" when designing the character-generating feature of his filmmaking kit. So as not to jeopardise the continued asssembly of the Catalogue - which had already been vetoed from above and which his line manager, having stumbled upon Nanneman's misuse of city council lab space by mistake, was by turns tolerating and interfering with - Nanneman ostensibly integrated his superior's list, but reduced each of the 16 broad 'types' to its key trait and generated 65,536 new character types by exploiting every possible combination of those qualities. (He excluded the arty 17th type for obvious reasons). The psychological complexity of these new redestructivish archetypes meant that Nanneman was able to create distinct imprints of every one of them using just two actors: himself and his second wife*. Every time one of these intricately designed algorithms was given a new name, wardrobe, haircut and surroundings he or she became a unique character (excepting the improbable eventuality of another filmmaker happening to choose the same type, name and look and putting this ‘new’ character into the same situation).

It is not known which 16 traits Nanneman divined from his line manager's original types, but we do know that he excluded any 'opposites' which might have cancelled each other out. Instead, Nanneman assumed that certain traits - e.g. faith - are an a priori human characteristic so included only their opposite - e.g. incredulity - amongst the 16 potential attributes: if a character lacked any one of the 16 'nurtured' traits he was assumed to have its opposite through nature. Whilst Nanneman acknowledged that such opposites don't always exist in pure dichotomy but on a sliding scale, he considered such nuances to be uncommon and irrelevant to the cinematic representation of human nature, certainly in a time when audiences needed reassurance, not speculation. In the circus and in the civil service, it had tended to be Nanneman's experience that people were one thing or another, and any apparent gradation in between usually boiled down to a case of deception or illness. Hanni, charged with finding "8 good rules" with which to shape the Nannemans' performanced blueprints of the thousands of archetypes Volodymyr had created, briefly looked into the old social networking websites, and discovered that everything Nanneman had suggested about human nature was more or less true. However, in response to the publication of Francis Dove's misanthropic Undepth In Real People And Those Who Believe They’re Real, Nanneman relented, creating a set of digital faders for the adjustment of the archetypes' character trait level-settings, allowing access to the middle ground between opposing traits. The knobs on the interface were all the same deliberately designed "stubborn" to discourage their use.

On discovering the zealous manner in which his underling had misinterpreted his original instructions, Nanneman’s line manager is said to have remarked that, the Nannemans having between them taken the time to create 65,536 characters, perhaps the unremittingly earnest Volodymyr should, from then on, himself be referred to as "Character Zero".

*(we know from his tattoos that she was called Hanni) 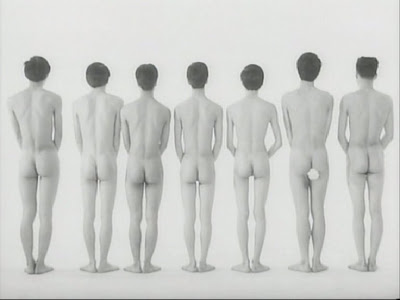