I am currently without a digital camera, so this entry has been illustrated with stock photographs.


We are building a team, here in Bourges, for our project: to (p)reconstruct a lost episode of an unfound time-travel adventure serial of the future -

UNIVERSAL EAR: The Curse of the Phantom Tympanum

- and to carry out various other tests, experiments and disciplines. The episode itself is set in a future Bourges where (following the over-zealous efforts of a corrupt heritage minister) wise-cracking holographic statues and ontologically dubious virtual heritage sites have more or less ousted any form contemporary human life (or ‘live heritage objects’ as we might become known).

We are putting together a team, but for now it’s just Aleksandra Niemczyk - my partner in love and art – and myself ‘in the field’, with support from the Bandits-Mages team back at base. Our crew arrives at the beginning of September; Lockwood and Betts will of course rejoin us in their roles as heroic Harley Byrne and his nemesis, Being, mysterious mistress of disguise.

In the meantime, we’re working on finding a better job description for Niemczyk’s role in this project in relation to mine, aside from her role as production designer: co-pilot? augmenteer? vasulker? I had some idea that the ideal term might be found somewhere in the nomenclature behind ‘three-strip’ film; the idea that we’re each exposing different prime colours of the finished thing. But there’s no word there that would look cool enough on a business card.

Today, we attempted a sort of dérive soumise (does that just about translate as ‘submissive drift’?). Rather than the follow the traditional counter-spectacle spirit of the dérive we embraced city planning and the heritage industry by beginning to follow, as closely as possible, the route of a sinister circle that appears on the city map to demarcate everything that is within an 8-minute walk of the famous cathedral. A circle which, even if its position was quite deliberately chosen for reasons shadier than tourist convenience or to make particular emphases, must still contain some element of randomness, some unexpected ambiences (ambience is a key element of Phantom Tympanum). We hoped, in other words, to grab a slice of the city’s sound life while illuminating some conspiracy that would tear apart city hall and the Alchemists Guild.

Niemczyk taped the sound as we went and, if our footsteps give us away on the recording, we were quite disciplined in remaining wordless. Occasional bursts of my Super 8 camera motor when we reached points that were touched by the circle will both augment the ambience and help us to align the film material with the sound material when the former is eventually processed.

Unfortunately, my British foolhardiness led us out on this scientific expedition at the height of the day’s heat and, when we abandoned the project at the exact halfway point, we found ourselves dehydrated and without water in a town whose high streets suddenly seemed devoid of any tabac or even so much as a Tesco Express.

Casting our principles to the wind, we cut back straight through the city, cross-sectioning our sacred circle, past the cathedral, our will fading. The historic stone dissolved like a hallucination or an unconvincing virtual reality transition, into endless sand dunes peppered with melting monuments: we were to die in the desert.

Thankfully we were two, and our mutual encouragement (even when Niemczyk slowed to photograph an abandoned shop or stencilled graffito that briefly rematerialized) saw us reach the south-west of the city and the familiar sight of Le Panier D'Auron grocers where you can always get a litre of water and a plastic-wrapped croissant. Logically, our plight cannot have lasted for longer than 16 minutes, but time is subjective when all you see around you are shimmering mirages of the re-animated, location-specific historical moments you’ve been reimagining in front of a laptop for the past six months.

Tomorrow we will attempt to complete the other half of the circle. Seeing as Niemczyk was on sound duty today, I’ll take it tomorrow – giving us, in effect, one semi-circular ear each on the city. Is there a job title for Niemczyk somewhere in that image? 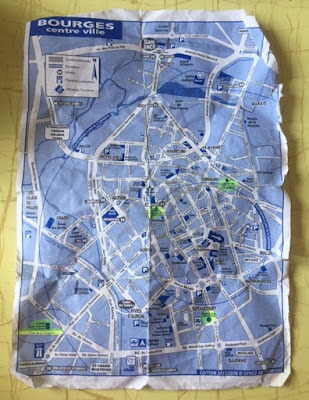