We seemed to find our rhythm today. Following yesterday's atrocious camerawork, I switched to the sound recorder to gather street ambiences along the left 'ear' - the western half of the sinister circle that’s printed on local maps of Bourges. I think I’m more comfortable framing sounds. Meanwhile, Niemczyk took a freer, more expressive approach to filming those areas where the circle corresponds to a place that can be accessed by the public.

We took more stills today, which should make the finished document a little richer for the casual viewer. We joke that we are making the world's most pretentious holiday movie, but deep down we know we're doing work whose tremendous importance will only be recognized several generations along the line.

Of course, I forgot to delete yesterday's sound file so the recorder cut out 48 minutes into today's walk. We continued recording sounds moments later with Niemczyk's iPhone; my left ear, then, will have a little sonic nick cut out of it, and a flat top.

Curiously, today’s prescribed semi-circuit happened to take us past the cinema where my movie Epizoda ? played last November, and also past the Rue Mausecret, giving us the exact view that I saw on Google Maps and which you probably remember me Tweeting about, six months ago almost to the day. As the (indispensible) Encyclopedie de Bourges tells us, via Google Translate:

‘It is a very old neighborhood, which included both the Jewish neighborhood with the presence of the synagogue, and undoubtedly the neighborhood of mysterious or dubious practices constituted by sorcery, black magic or alchemy. Thus, we find the street name "Montsecret" as early as 1541, which will see the spelling of his name changing. For some local scholars, two versions of this street can be brought, namely "my secret", that is to say a street that contains unknown elements, or "mau secret" that can be translated as "bad" And then we touch black magic.’ 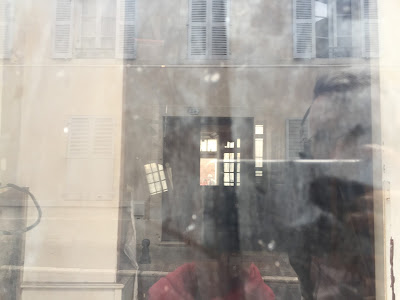