For the first time since we held rehearsals for It’s Nick’s Birthday in a disused Christian Scientist building on Daisy Bank Road in Rusholme, I’m regularly going to church: the preparations, and hopefully the production, of The Curse of the Phantom Tympanum are continuing in the chapel of the 16th century converted convent (we don’t know if the nuns were saved or damned by the conversion process) inhabited by the Ecole Nationale Supérieure d'Art de Bourges. The studio is, indeed, known as the Chapel, and occasional cherub-like characters watch us as we work, perhaps - like us - trying to work out just what the hell we’re doing.

We have loosely split into teams: the Tangibles, being Niemczyk accompanied by interns Charlène Delevacq and Gallane Decerle, are painting, building, and otherwise fabricating our props, sets and costumes; while the Intangibles, myself and Shengwen Yuan, are trying to fix together some antiquated video and TV cameras in order to undertake a period of experimentation and the raising of holograms.

But it’s us Intangibles who wind up covered in dust and furiously wrestling with the very physical incompatibilities of frigid vintage cables and a VHS recorder that refuses to hold on to its tapes. No less than four classic cameras are written off as unusable (for now) in this way, before we reluctantly accept that we may just have to go digital for this one (it is a digital media residency after all, just that we’re trying keep the digital aspect purely thematic). Damien Chaillou, video technician and studio guru, eases us through the process. Given the morning’s issues and my ongoing lack of a pocket camera, it’s a small triumph when we finally see a (delightfully hauntographic) image on the sturdy old problem-free analogue monitor. 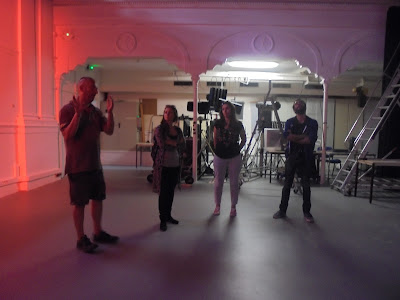 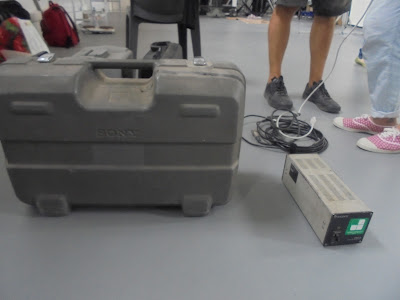 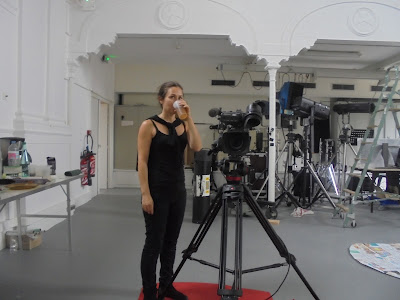 The change of format requires a change of aesthetic, so Yuan and I decide to take the ghosts out of the recording format and put them into the image. This will require some work with the lights tomorrow, though thankfully not the heavenly ones that loom above us just yet; rather, a profane standing lamp to create some profane silhouettes of our sisters, the Tangibles.
Posted by Mr Cole at 08:06

Labels: EARLog III, The Chapel, The Curse Of The Phantom Tympanum, video