Worship the sun, and invoke the wrath of the rain. Well, that might be utter rubbish, but the project is certainly suffering from a severe case of hubris after yesterday's glowing successes, as today the crew arrives drenched by an 8.57am downpour. More seriously, this morning's guest actor slips on the way to the studio and, after a cup of sweet tea and the reassuring gazes of half-a-dozen medically incompetent filmmakers, returns home to rest it off: she will return tomorrow only if she's feeling much better.

But after that, the rain seems to have quenched its thirst for misery and misfortune, and instead becomes a pleasant background to our day's work, cocooning us in the studio and make the team feel a bit better about a day with the shutters mostly down.

Lockwood even begins to hibernate, after our first shot of the day - in which Harley Byrne is trapped in a tomb in the foetal position and believes himself on the brink of death - runs without a hitch. He's in a difficult place at the moment (emotionally rather than geographically - he's quite charmed by Bourges) and this moment seems important to him; we leave it as long as we can before removing him from his tomb so we can strike the set and set up the 'Bourges streets' scene. A respectful nod, for that first shot, should also be directed at intern Arthur Leray: on every shoot, there seems to be one person who gets roped into playing 'unidentifiable body parts' - yesterday he was a shoulder in a Manchester postal workers social club, and for today's opening shot a holographic saint's hand. 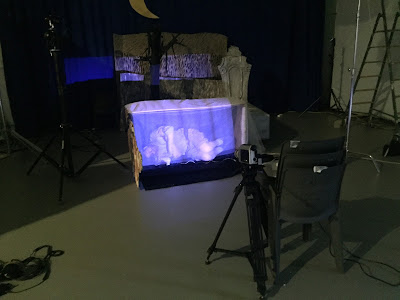 The 'Bourges street' shot takes up a serious wedge of the day which, as we reflect, could be considered somewhat daft, seeing as how the street itself is just around the corner but instead we've flown two artists and two actors across Europe to shoot it in shoddy cardboard replica in a studio five minute's walk away. But that's sort of the point, somehow. And Niemczyk's art and draughtspersonship, and ex-intern Yuan's legacy Palais Jacques Coeur replica, conjure a certain kind of magic in the studio when the whole wonky perspective shot is put into place.

Leray and soundie Queissner (who is stranded on set amidst mainly silent scenes today) team up to set-wrangle a simple close-up that just begged for a little complication. We add a row of houses, a moon, a reflector and some authentic Berry fog to the scene, and I only regret we didn't add any foliage.

After that, it's back to trying to create a floor made of liquid hologram - or quicklight. It's an athletic feat, since working with a projector, a Super 8 camera with no monitor, and a hand-held vase-as-wonky-lens actually involves building up a sweat on this chilly Bourges afternoon. Lockwood, too, is pushed to his limits as he must replicate fighting for his life while sinking through a cross between quicksand, liquid light, and malevolent, dissolving floor tiles, no doubt dreaming of a warm, comfortable tomb in which to sleep once this trial is over. 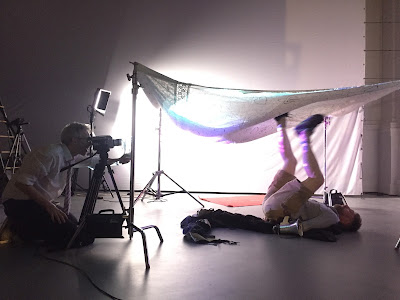 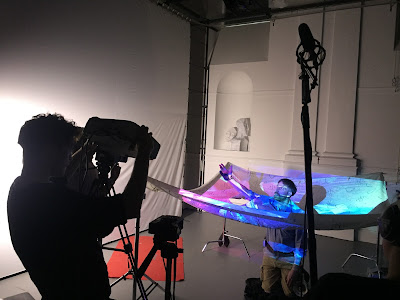