Shoot day 01. It starts promisingly as we are warmly welcomed to the Chapel by the building's guardian, forced out of bed on a Sunday - it makes a big difference to get a smile and some kind shrugs about my French language skills rather than the tuts and sighs I probably deserved. Next, an upbeat meeting between our assembled crew, all together in one place at one time, and augmented by Lockwood, our leading man. I establish some rules: clean up after yourself; one take for each shot; never forget where you last saw me put my folder (because I will).

As regular readers will know, the UNIVERSAL EAR set opens each day with a performance of the L'Institute Zoom company anthem, Fat Larry's Band's 'Zoom'. The French contingent take to this ritual with admirable enthusiasm, although it is a crime of culture that none of them have heard this classic before (leading lady Tuesday Betts, who arrives in the evening, puts the British familiarity with this song purely down to the ubiquity of Smooth FM in our cafes, streets, schools and prisons).

Only once the song is finished do things start going downhill. It turns out I have forgotten to bring not only the clippers to do Harley Byrne's 'do', but his entire uniform; Leray and I are dispatched in different directions across Bourges to rectify this. The guest cast begins to arrive in my absence, little suspecting the wait they will have ahead of them, since on my return our efforts to perfect the hologram effects that we require for all of today's shots prove unsatisfactory. Over the past few test weeks, we managed to get the fx to what we considered to be something like 70% perfection; today, it proved a gross overestimation. 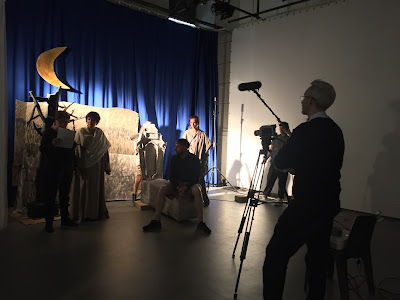 The complexity of the script was another mis-judgement; naturally, it's pretty hard for the French cast, with mostly a limited grip on the English language (though far better than my French, as the common and disingenuous disclaimer goes), to understand the esoteric and pretentious dialogue, let alone memorize it and perform it with the required (albeit limited) level of nuance.

While the togetherness and doing-ness of the day was still very valuable (we're not here to make a movie, after all, but to make a movie), it was a huge blow to lose the time that could've been spent with these wonderful performers figuring out how to best create their characters - instead we just wound up trying to get the shots. We'll try to use these shots as a skeleton and add some flesh together in the week, where schedules allow. After months of script work worrying about words, it turned out to be light itself that we had neglected.

One nice touch: Robin-Tyrek steps up to be our smoketographer; she buys a vape machine and fluid from a local tobacconist, and it is magical to discover the smoke in our movie will be of the 'Berry' variety. It turns out that this refers to the flavour of berries rather than a specific vaping blend local to the the Berry region in which we are stationed, but sometimes authenticity is in the eye of the beholder.

In the evening, Tuesday Betts arrives via both Liverpool and Manchester airport, having turned up wrongly to the former and caused a security alert at the latter, and having eaten nary a Wagon Wheel since 11am. Believe it or not, more mischief and chaos may be just what the production needs. Niemczyk, whose lunches and dinners have fair sustained our bellies and souls since long before the Canon 814 rolled today, does not disappoint with her baked roots. 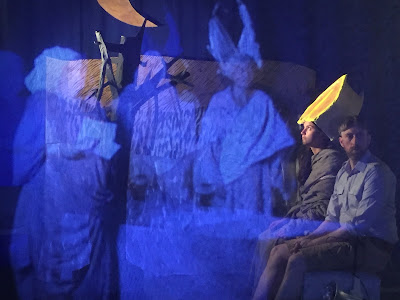