After yesterday's catastrophe of light, today a gift. For the only day of the shoot, today we are away from our regular studio - The Chapel - and working in the café space of the Nadir arts venue instead; one of the downsides of this Sabbath-honouring shift is that today's space has high up windows that are pretty difficult to cover, leaving our lighting options (supposedly) limited. But as we recreate the Manchester working person's club from where hero Harley Byrne introduces each episode of UNIVERSAL EAR, we discover that the morning light flooding through the window is perfect for the scene, and the finite splendour of its glow causes us to work with such pace and attentiveness that we manage to complete three charming shots in the time it took us to go home and get the costumes we forgot yesterday.

A special nod goes to visiting German guest Valerie, friend of our soundist Nina Queissner, who - aside from her general assistance - stepped up to play a blinder as the waitress serving Byrne his tea. ('Should I have any expression on my face?' 'Sort of... Mancunian.' 'Ah, I think I know what you mean'.) 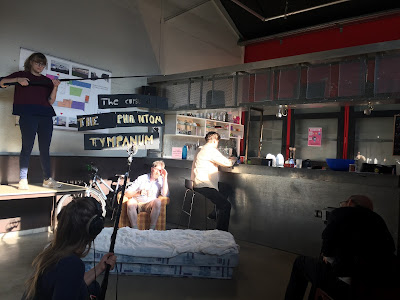 It all means we have time to bask in the surprise late September warmth as we prepare for an afternoon shooting something altogether less kitchen-sink: the cursed tympanum itself. Tuesday Betts will utter her first lines as the enchanted Mrs Coeur, poly-authentic incarnation of the wife of famous Jacques, who offers Byrne a helping hand (OR IS IT?) in our hero's quest. Betts has previously pointed out how big the real Mrs Coeur's hat was (in the same email that she asked whether she should prepare a French accent; I forgot to reply) so when Decerle wheels in her absurd millinery monstrosity it should be no surprise that it is impossible to keep balanced on Betts' talented head.

We have the brainwave of strapping the thing to the background of the set and letting Betts kind of stand underneath it instead, offering her the reassurance that in Hollywood, no leading lady is expected to support the weight of her own hat. It proves to be the random factor we require for the sequence in which Mrs Coeur, transformed into a statue alongside Harley Byrne and Saint Ursinus, is the only one left with any mobility whatsoever: indeed, even when she turns her head, her hat remains fixed.

The static nature of the scene makes it reasonably straightforward, if it is the most complex costume set-up so far. Costumes are a lot easier than holograms, though - not least because they're not my responsibility. Still, I hope on a future project we can cross the costume/tech department divide by lowering in one of Betts' hats on a drone and having the thing carry it around over her head for the duration of the episode. 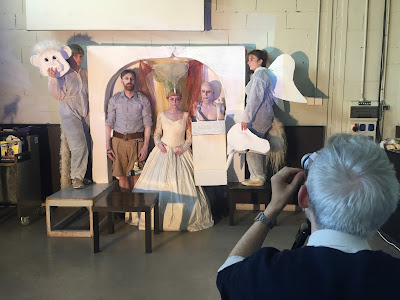